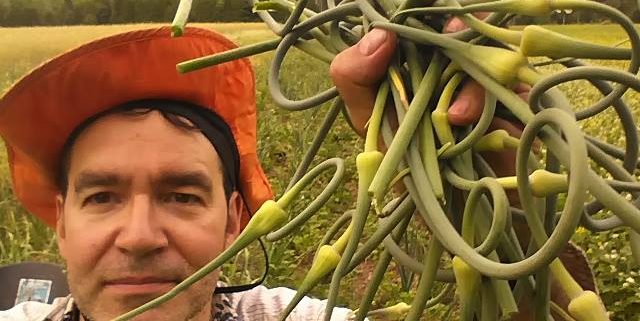 Before turning to garlic farming and actively supporting the local farm movement, Peter McClusky left his near 20 year stint in New York City spent partly as a Digital Media Exec for a $50/week farming internship with Action Ontario (similar to WWOOFing); or as he calmly states, a move from the bland world of selling towards something he felt was moving and worthwhile*.

Since then, Peter has been growing up to 25 000 plants of garlic a year since 2009, a number he says pales in comparison to other Ontario Farmers, many of which have been working closely with Peter’s Toronto Garlic Festival, now in it’s 5th year with growing interest in the community.

Part of that growing interest comes from garlic’s supposed medicinal benefits. After admitting some scepticism on the medicinal and anti-microbial properties of allium sativum, Peter says there is good anecdotal evidence for it’s benefits**.

Dark Chocolate and Roasted Garlic Ice Cream
(Courtesy of Toronto Garlic Festival AND actually tasty)
Made with or without an ice cream machine.

Use whisk to combine chocolate and 1 cup cream in a 2 quart saucepan over medium heat. Add remaining cream. Bring mixture to simmer, stirring occasionally. Remove from heat. In a medium mixing bowl, whisk egg yolks until they lighten in colour. Gradually add sugar and whisk to combine. Slowly whisk ⅓ of the cream mixture into the egg yolks and sugar. Pour in remaining cream mixture while continuing to whisk. Return the mixed ingredients to the saucepan over low heat, stirring frequently, until the mixture thickens slightly and reaches 172 F (78 C) . Add garlic. Pour mixture into container and let sit at room temperature for 30 min. Strain to remove garlic pulp. Stir in vanilla extract. Refrigerate for up to 8 hours or until temperature reaches 40 F (4 C) or below. Pour into an ice cream maker and process for approximately 30 minutes. Serve as is for a soft dessert or freeze for another 4 hours to allow ice cream to harden.

To make without an ice cream machine: Remove container from freezer every 30 minutes, stir for 2 minutes, and return to freezer until mixture reaches desired firmness.

*This personified turn from the bland to something almost carnal is a story shared by garlic’s history: from the puritanical admonitions of the early Britons — “And most dear actors, eat no onion, nor garlic, for we are to utter sweet breath, and I do not doubt but to hear them say, it is a sweet comedy” —  to the miffed Northern Italians and their culinarily “licentious” Southern neighbours culminating in a campaign to ban garlic in food by Berlusconi in 2007.

**Of the many stories one could tell, from garlic tea time to garlic garlands worn by the French (and not to deter Nosferatu and his loup-garous), one guest had this to say:

“I was sick. My mom told me to rub garlic on my feet then wear socks over it. I was literally burned by garlic.”

I wonder if the same magical effect can be said of black garlic.