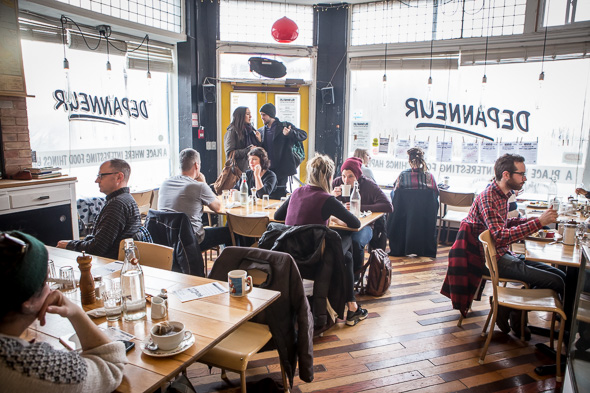 The Depanneur is easily one of Toronto’s most intriguing eateries. It’s not so much a restaurant but a blank canvas owned by Len Senater and programmed much like a nightclub with an ever changing cast of cooks coming through.

It’s got a kitchen party kind of vibe thanks to its single room stature where the kitchen and dining area all inhabit one space. When it gets busy, the windows fog up and the room can get quite loud but it all just adds to the excitement.

Some events, like workshops and supper clubs (multi-course menus presented by guest chefs) are ticketed while other offerings like weekday dinners and table talks are drop-in only and generally feature just a single dish. It’s not licensed but BYOB (no corkage fee) is sometimes encouraged.

Brunch on weekends is the only thing offered with any real regularity and the cash-only affair is helmed by Brad Kurtenbach who has dubbed the current menu as Thick Cut Brunch. It’s named in tribute to some of the fattest slabs of bacon I’ve ever been so fortunate to encounter.