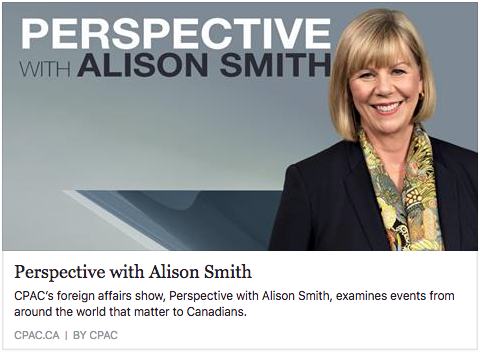 CPAC’s foreign affairs show, Perspective with Alison Smith, examines events from around the world that matter to Canadians.

Perspective this week looks at how Syrian refugees have managed in the year since they came to Canada and what it is like now on the ground in Aleppo.

Alison speaks to CBC Reporter Margaret Evans on what it’s like on the ground in Aleppo. Michael Molloy, former foreign service officer and former Canadians Ambassador to Jordan speaks to Alison about the resettlement of Syrian Refugees in Canada as well as obstacles faced by newcomers to the country. The Newcomer Kitchen, a project in Toronto that invites newly-arrived Syrian refugee women to cook a weekly meal is also profiled.

Finally, Alison speaks to Goldy Hyder, co-founder of Century Initiative about the importance of growing Canada’s by increasing immigration in order to grow the economy.

NK is featured at 15:00, with additional closing remarks by Rahaf at the end of the segment