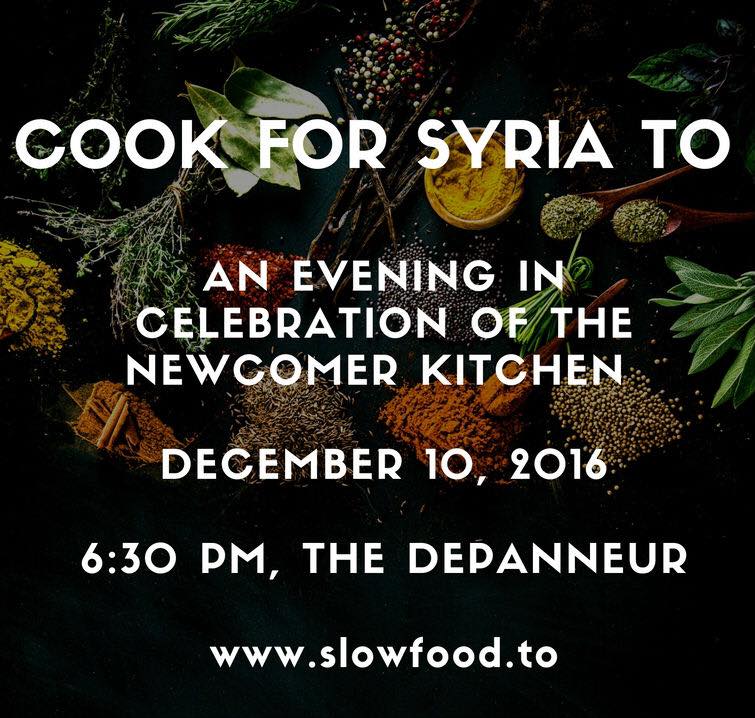 In honor of Terra Madre Day – Slow Food International’s day to promote the diversity of food traditions around the world — Slow Food Toronto is proud to announce that we are partnering with The Depanneur and Newcomer Kitchen to host an event in celebration of Syrian food. It’s also a day that explores how the Slow Food movement can use its creativity and knowledge to express love for the planet and defend the future for the next generations.

A very special thank you to 100km Foods and The Big Carrot for sponsoring this event!

Tickets are $60 for Slow Food Toronto Members and $70 for non-members.
We are encouraging people to purchase tickets soon if they are interested in attending this unique event.

Fattoush is a popular Levantine salad made using toasted or fried pieces of pita bread combined with mixed greens, fresh vegetables like tomatoes, cucumber and radish, but varies according to season and region. Mint and parsley lend a freshness and fragrance, and dried sumac (the same staghorn sumac that grows here in Ontario) gives the olive oil-based dressing a distinctive tangy flavour. (#vegetarian, can be #GF)

Fatayer are a whole category delicious small baked treats that range from open-face, pizza-like flatbreads to cute little baked turnovers, with countless different shapes and fillings. Tonight will feature a cheese fatayer, as well as a vegan options such as muhamarra (spicy red pepper) or zataar (thyme and sesame).

Maldoum can be found in kitchens from Turkey to Lebanon; this is a more rustic, countryside version of of the dish, that adds green peppers, tomatoes and potatoes, which are traditionally arranged in attractive layered patterns in a large shallow round pan before baking. A meat and vegetarian version will be served alongside a combination of short-grain rice and fried vermicelli noodles. This dish will be served with Khyar Belaban. Much like tzatziki, it’s well-known Greek cousin, this combines cool yogurt with garlic and cucumbers, but the addition of mint makes for an especially cool and refreshing salad.

A relative of Namoura or Babousa, Harissa is one of the region’s many delicious syrup-soaked semolina cakes. This one doesn’t use yogurt, but rather tahini, giving an extra rich and nutty flavour. A traditional selection of dried figs stuffed with walnuts, and dates stuffed with almonds will also be served, with tahini & grape molasses for dipping.

People In Toronto Are Lining Up For Brunch At A Pop-Up Restaurant Run By Syrian...