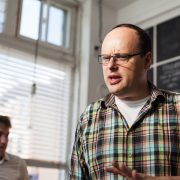 A Taste of Home

Len Senater heard that many Syrian refugees who came to Canada were living in hotels and had no kitchens to make their own food. He did have a kitchen and wanted to provide a space where Syrian refugee women could cook.

Between sips of tea in glasses, some enhanced by fresh mint leaves, roughly a dozen Syrian refugee women prepare malfouf: cabbage rolls stuffed with halal ground beef, rice, spices and a few dashes of pomegranate molasses. These refugees, many of whom have been in Canada only a few months, spend the day cooking together in a Toronto storefront for 50 people who have preordered their meals. Between stirring steaming pots and searching for tender cabbage leaves, they show each other photos of family members on their smartphones, tell stories and debate the best way to make their dishes. It all takes place at the Newcomer Kitchen, a weekly event where up to a dozen Syrian women gather together to cook meals from home.

Last spring, Len Senater, owner of the Depanneur, a space that hosts pop-up food events in Toronto’s West End, heard that many Syrian refugees who came to Canada were living in hotels and had no kitchens to make their own food. He did have a kitchen and wanted to provide a space where Syrian refugee women could cook. Although he didn’t speak Arabic or have any connections with the community, he did have a group of volunteers who wanted to help. One of them connected him with Rahaf Alakbani, 25, and her husband Esmaeel Abofakher, 29, who had come to Canada as refugees from Syria in February. The couple then found a group of women who wanted to cook, and brought them to the Depanneur.

“There was a language barrier and a culture barrier,” says Senater, “but Cara [Benjamin-Pace, the Newcomer Kitchen’s executive director] and I bought a bunch of random ingredients, and when the women arrived, we said: ‘Why don’t you just cook something?’ They were like, ‘Really? You want us to do the cooking?’” After he answered “yes,” they took over the kitchen.