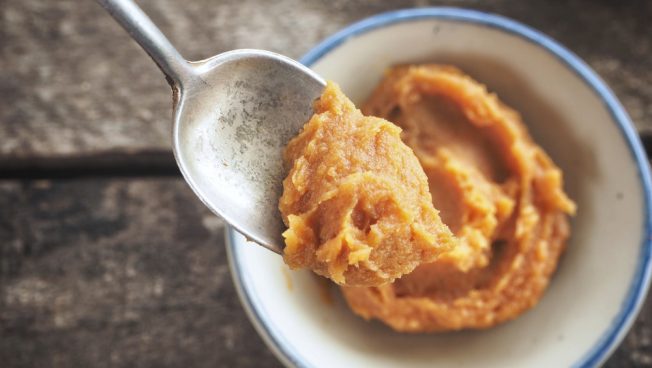 Miso (みそ or 味噌) is a traditional Japanese seasoning produced by fermenting soybeans with salt and koji (the fungus Aspergillus oryzae) and sometimes rice, barley, or other ingredients. The result is a thick paste used for sauces and spreads, pickling vegetables or meats, or mixing with dashi stock to serve as the familiar miso soup called misoshiru (味噌汁), a Japanese culinary staple.

Typically, miso is salty, but its flavor and aroma can vary widely depending on the ingredients and fermentation process. Different varieties of miso have been described as salty, sweet, earthy, fruity, and savory. High in protein and rich in vitamins and minerals, miso played an important nutritional role in feudal Japan. Miso is still widely used in Japan, both in traditional and modern cooking, and has been gaining worldwide interest as a healthy and delicious fermented food.

Join Wakaba Hoshino and Aoi Yoshida from Toronto’s Local Koji Co. for a fun, hands-on introduction to making your own miso from scratch. They will explain the background, techniques and uses of different kinds of miso, such as white, red and mixed. Participants will get to make and take home 500g of their own miso from local, non-GMO Ontario soya beans, salt and koji — rice inoculated with a special fungus. You will also learn how to use miso to make a traditional miso soup, as well as flavourful paste that can be used as the base of a salad dressing or marinade.
—–

—–
Wakaba Hoshino and Aoi Yoshida are two local moms from Japan who love good, yummy, and healthy food. We love Miso so much that we learned the traditional techniques and started to make it from scratch. Our passion and love of Miso and Koji fungus extended to opening a business called Local Koji Co. We go back to traditional Miso-making: simple local ingredients, and a lot of patience.  We believe including fermented foods with local ingredients in our everyday lives enrich your health and most importantly taste bud.