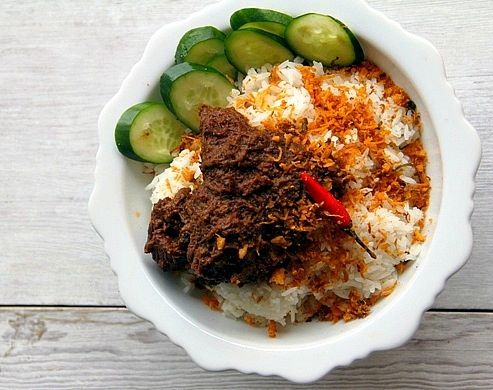 Rendang is a style of curry-like stew popular in Sumatra and Malaysia, characterized by a long slow cooking in coconut milk such that the sugars caramelize and the liquid largely evaporates, making the sauce relatively dry. The spices, lemongrass, garlic, shallot, ginger and galangal used in rendang have antimicrobial properties and serve as natural preservatives. If cooked properly, dry rendang can last for as long as four weeks at room temperature

A popular but labour-intensive dish, it’s often served on special occasions. In a 2011 online poll 35,000 people held by CNN International, rendang was chosen as the number one dish of the ‘World’s 50 Most Delicious Foods’.

Served with steamed rice and cool slices of cucumber. There will be a vegan tofu version as well.