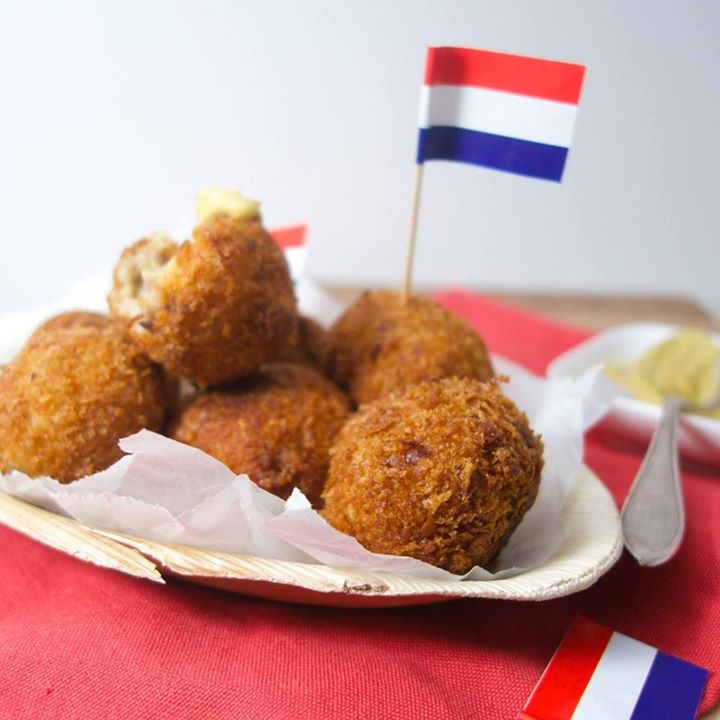 Totally stoked to have Justin Go and Alison Broverman back at The Dep serving up authentic Dutch snacks and comfort food. Their menu embodies the concept of “gezellig”— a Dutch word that encompasses all things cozy and convivial — a big part of what the The Dep is all about.
Bitterballen are tasty little deep-fried balls consisting of either minced beef or vegetables cooked in a savoury roux and served with a special Zaanse mustard from the North of Holland. Beef, Vegetarian.
$7
Krokets have a minced filling in a savoury roux, deep-fried into an oblong shape, and served on rye bread – the traditional method is to mash the kroket and spread the filling on the bread (it might sound weird, but trust us on this one). Chicken. Served with home-seasoned paprika chips.
$7
The frikandel is Holland’s answer to the hotdog – a homemade sausage made of a blend of ground beef, pork and chicken, and served on a bun with onions, mayonnaise and curried ketchup. Served with home-seasoned paprika chips.
$7
We’re pleased to introduce kaassoufflé to the menu. This tasty snack consists of melted Gouda cheese inside a thin puff pastry wrap which is breaded and then, you guessed it, deep-fried.
$7
Their main dish is andijviestamppot, a delicious combination of mashed potatoes and escarole and served with smoked sausage, homemade bacon lardons and gravy; a lighter, early fall version of boerenkool traditionally made with kale. We’ll also have a few Dutch-style meatballs on hand as an alternative to sausage.
$9, vegetarian: $8
For dessert, we’re proud to have partnered with the folks at Ed’s Real Scoop to bring you speculaas ice cream. Inspired by the popular Dutch spiced cookie, the ice cream is flavoured similarly and contains chunks of speculaas.
$6
PRIX FIXE SPECIAL:
Choice of:
Bitterballen -or- Kroket -or- Frikandel –or- Kaassoufflé
+
Andijviestamppot
+
Speculaas ice cream
$20
(eat-in only)
——–
Justin Go began cooking Dutch food years ago for his friends at his annual “Holland Day in Canada” (a completely made-up holiday) party that he would host with his wife, Alison Broverman in their home. He was pleasantly surprised when, after tasting boerenkool for the first time, his friends began clamouring for it every year, and he wondered if there might be even more of an audience for Dutch food in Toronto. In early 2014, he finally decided to find out and the pop-up Borrel was born. After operating as a weekly pop-up food event at The Ossington bar for eight months, Justin and Alison have since successfully brought Borrel to bars and venues all over Toronto, including the cozy Cloak & Dagger Pub, the raucous Feast in the East,Pedestrian Sundays in Kensington Market, and more.