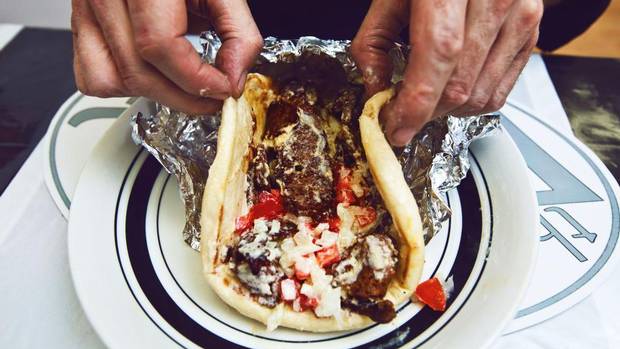 Defining truly “Canadian” culinary experiences has always been a bit challenging, but anyone who’s ever been out for a night of drinking in Halifax knows that what goes down at “Pizza Corner” is about as Haligonian as it gets.

A relative of the Greek gyro or Turkish döner – a classic street food that can now be found in nearly every corner of the world in one form or another – it’s a akin to a giant spiced meatloaf, most often prepared on a vertical rotisserie. Meat is sliced off, piled onto a flatbread of some kind, and topped with a variety of toppings and sauces. Halifax has its own specific combination: tomatoes, onions and a uniquely sweet “donair sauce”.

I’ll be making my donairs from scratch, from a recipe apparently cribbed from the Halifax donair’s legendary birthplace, King of Donairs, courtesy of tonight’s guest speaker & East Coaster, Sheryl Kirby. Non-traditionally, I’ll be serving mine up with some roasted potato wedges and a cucumber & feta salad.
$12 +HST
#vegan option available