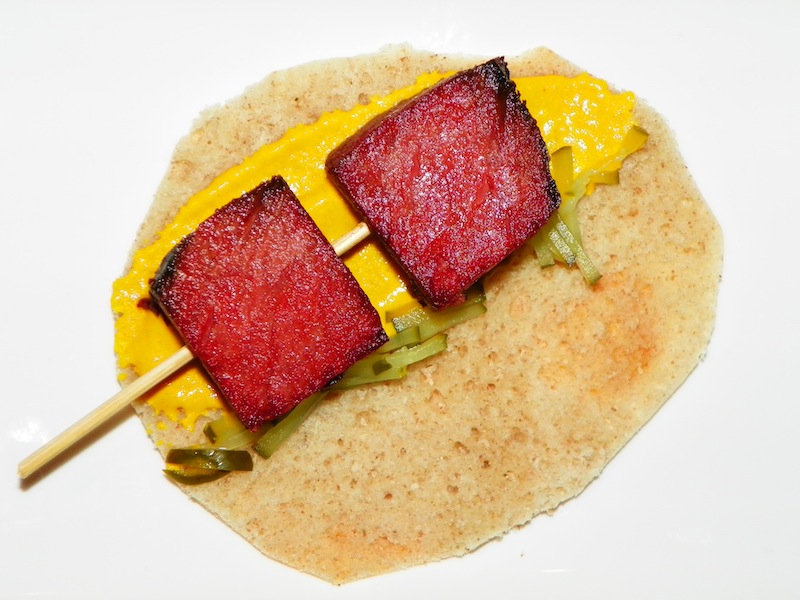 Based on an old family recipe going back 25 years, Chef Luke Hayes-Alexander is re-imagining Montreal-style smoked meat for the 21st Century. A profoundly labour-intensive process of curing, smoking, aging and steaming transforms humble beef brisket into the tender, flavourful delicacy that has been a Jewish deli favourite for more than 60 years.

But that’s where the similarity ends… Chef Luke gives his smoked meat a decidedly modern twist, wrapping it in 2 hand-made flatbreads, one with a classic combination of homemade mustard and pickles, the other an exciting fusion with homemade kimchi, served along with a fresh coleslaw.
$12 (tax-in)

—–
Culinary wunderkind Chef Luke Hayes-Alexander has been cooking professionally since he was 15, much of that time spent making multi-course tasting menus at his critically-acclaimed restaurant, Luke’s Gastronomy in Kingston. Now 23, Luke’s taken his show on the road and can be found innovating in kitchens, pop-ups and events across Toronto and abroad, including the Culinary Theatre at Taboo Muskoka Resort, and his new L.U.S.T. Supper Club project.
http://www.lukechef.com