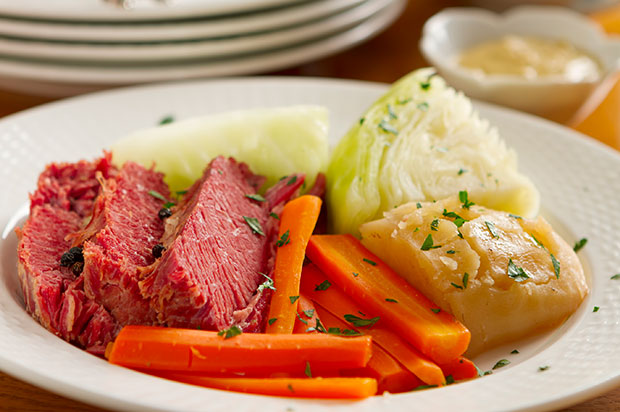 Jiggs Dinner (also called boiled dinner or cooked dinner), is a traditional meal commonly prepared and eaten on Sundays in and around Newfoundland. Variations can be found all around the North Atlantic, from the New England Boiled Dinner, to Irish Corned Beef & Cabbage, to Portuguese Cozido. Jiggs was the Irish central character in a popular, long-running comic strip, Bringing Up Father, whose favourite meal was corned beef and cabbage, and after whom the dish became associated in Newfoundland.

A true Jiggs Dinner uses salt beef, also known confusingly as both Naval and/or Navel beef because as a preserved meat, it was commonly found on British Navy ships, and because it was often brisket cut from navel area of the cow. It is a relative of corned beef, which got its name from the large kernels (“corns”) of rock salt used to cure it.

The salt beef, after an overnight soak, is cooked with cabbage, potatoes, carrots, turnips and a cloth bag full of split peas, which becomes “pease pudding”, a very old dish celebrated in nursery rhymes, jazz standards and even rap samples. It’s served along with pickled beets and mustard.

This particular recipe comes from Chef Murray McDonald, executive chef of the Fogo Island Inn, which tonight’s guest speaker, Valerie Howes, will be talking more about.

7pm: TABLE TALK: Valerie Howes
Valerie Howes is an award-winning food and travel writer who is working on a book about the culinary landscape of Fogo Island, Newfoundland.
http://www.valeriehowes.com.