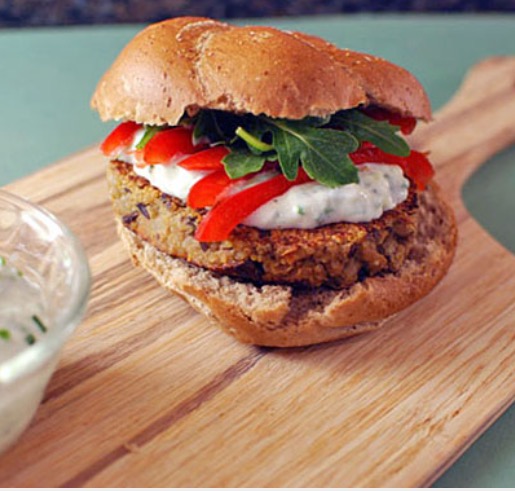 Culinary Institute of America grad and Eleven Madison Park alumni Marchelle McKenzie takes a night off from one of Canada’s premier kitchens (hint: a Zagat “World’s Top Restaurant” 3 years running!) to pop by the Dep to make one of her favourite dishes: quinoa burgers on artisanal buns, topped with goat cheese, arugula and roasted red peppers, served alongside a spinach salad with dried cranberries and oregano.
$12 +HST
Add maple-glazed bacon +$2

—–
Marchelle McKenzie‘s interest in baking and pastries can be traced all the way back to the Easy Bake Oven she received when she turned five. In high school, she interned for Bonnie Gordon College of Confectionary Arts, and then went on to an associates degree in Baking and Pastry from the Culinary Institute of America. Marchelle honed her skills in places like Eleven Madison Park and Betony in NYC, and is currently the head pastry chef at Enville Catering Company in Toronto and the owner of Butter and Spice Bakeshop.