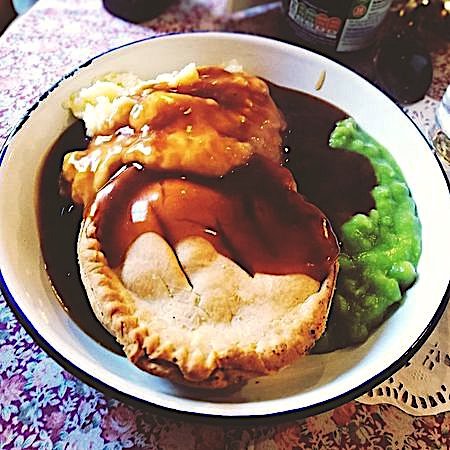 Anglo-Australian Pie ‘n‘ Mash! $13
A favourite in both Australia and The UK. Flaky, buttery pastry, filled with tender Seitan ‘Steak’ and Ale and a hearty helping of veggies within a thick ale-gravy. Served alongside creamy garlic mashed potatoes, a pea puree and drizzled with some extra gravy for good measure!

Jacob Saphra was the mind behind Brixton Grill, an all-vegan organic BBQ market stall and catering company, which was active between 2012-2016. He is now a yoga teacher and plant-based nutrition consultant who has previously hosted sold out drop in dinners at the Depanneur.

Brenton Pedler is an import from Australia. He has lived in Toronto for 7 years and has worked in many of Toronto’s most popular vegan restaurants. Most recent and most notable is his work in helping launch and manage Jennifer Bundock’s APieCalypse Now Vegan Bakery on Bloor St. W. He is a bake off professional plate winner and his cooking style is best described as home cooking favourites with a technical/vegan twist.
—–

Every Thursday The Depanneur is an ‘open mic’ night for culinary talent in TO, where we invite guest cooks, amateur or professional, to come and make their favourite dishes.

WORKSHOP: A Day in the French Kitchen by Chantal Vechambre
Scroll to top