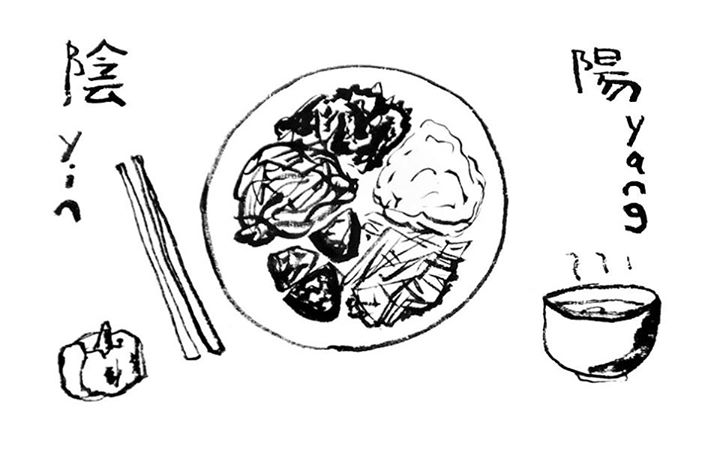 Traditional Japanese country cooking is very different than the kind food typically found in Japanese restaurants. A variety of simple vegetable dishes, served with rice and pickles is much more likely to be found in a home kitchen than sushi or ramen.

This meal, themed on the balance of yin & yang, is a mixture of traditional Japanese ingredients and techniques and inspiration from living and cooking healthy, seasonal food in Toronto.

Nimono
A warm, simple Japanese-style vegetables stew of arame seaweed, carrot, onion and konnyaku, a firm jelly made from a taro-like tropical potato that is considered to be very good for digestion.

Sunomono (vinaigrette salad)
A traditional “vinegared dish”; a tangy salad of turnip and hempseed and brown rice vinegar and yuzukoshō, a Japanese condiment made from fermented yuzu peel and chili peppers.

Served with a salad of organic kale and beets with sesame dressing, and your choice of brown or white Japanese rice

Kiyo Segawa draws inspiration from meals at her parent’s small organic farm in Iga, a small town in the mountains of central Japan (and the historical home of ninjutsu!). Growing up, Kiyo learned the philosophy of the macrobiotic diet from local food artisans; food rooted in health and simplicity with an emphasis on vegetarian, seasonal and minimally-processed ingredients. Kiyo went on to become a menu designer in Osaka, before moving to Canada several years ago, where she continues to work in food.

—–
Every Friday we invite guest chefs – amateur or professional – to come share their favourite dishes at The Depanneur.

SUPPER CLUB: From Jamaica to Mexico by Jasmin Taylor
Scroll to top