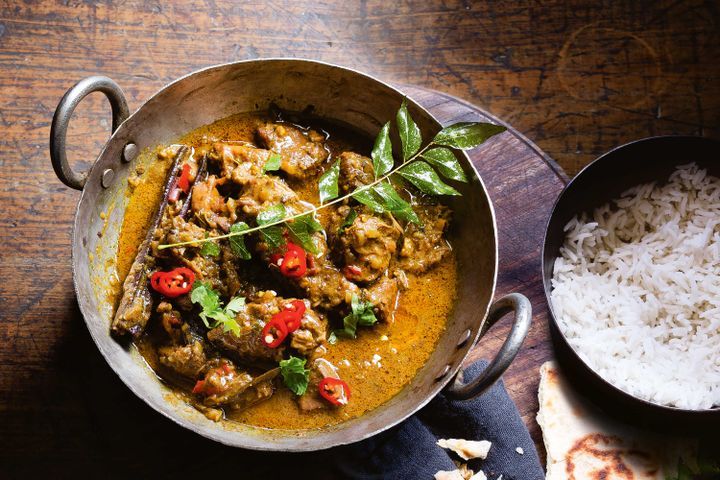 The Himalayas — the largest mountain range on Earth — is home to a diverse range of cultures and many unique cuisines. Tonight Suman Ralhan presents a few authentic, home-style dishes from the Indian province of Himachal Pradesh, nestled in the Western foothills of the Himalayas.
——

Himachali Goat Curry $14
Goat or mutton curry is a staple of Himalayan cuisine; succulent chunks of meat are slow cooked in a rich gravy made from onions, garlic, ginger and tomatoes, and infused with many whole spices like cardamom, cinnamon, cloves and bay leaves. Served with basmati rice.

Kadai Kaddu + Madra  $12
Diced pumpkin (kaddu) cooked in a wok with a mix of fresh ground spices including mustard seeds, coriander, cumin and red chilli, known as kadai masala; served with poori (1pc), a puffy, deep-fried Indian whole wheat bread. Madra is a kidney bean curry is unique to the Himalayan region of Chamba; a simple, mild curry made with kidney beans, yoghurt and a blend of spices, and served with rice. #vegetarian

Phirni $5
Made with ground rice, milk, crushed cardamom and sugar, phirni has the delicious, subtly sweet taste of rice pudding, but with a smoother, creamier texture; served chilled and topped with nuts.

—–
Suman Ralhan is a homemaker, who lives with her husband in Chamba, a beautiful town situated in the lower Himalayas in Himachal Pradesh, India. She has 2 sons, one of who is an IT engineer, working in Toronto. For her, cooking for friends and family is not a hobby, it is her passion!

—–
Every Wednesday The Depanneur hosts an ‘open mic’ night for culinary talent in TO, where we invite guest cooks, amateur or professional, to come and make their favourite dishes.
Learn more about our Drop-In Dinners