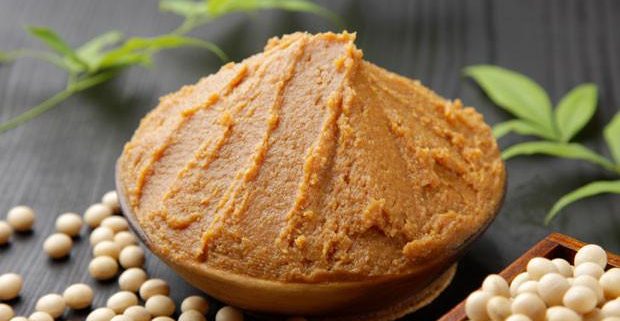 If you are interested in DIY projects, Old World food preservation, gut health or fermentation in general this is the class for you! Join Cheryl Paswater, Fermentationist at Contraband Ferments in Brooklyn, NY for a fun, hands-on introduction to the basic science behind making soy and non-soy misos, why they’re good for you. Students will be making a Heirloom Bean Miso to take home, as well as diving into learning how to use miso to make Nut and Seed Misos, Misozuke (Miso Pickles), Miso Cheese, Miso-Cured Eggs, and more in this miso-intensive class!

Miso (みそ or 味噌) is a traditional Japanese seasoning produced by fermenting soybeans with salt and koji (the fungus Aspergillus oryzae) and sometimes rice, barley, or other ingredients. The result is a thick paste used for sauces and spreads, pickling vegetables or meats, and mixing with dashi soup stock to serve as miso soup called misoshiru (味噌汁), a Japanese culinary staple.

Typically, miso is salty, but its flavor and aroma depend on various factors in the ingredients and fermentation process. Different varieties of miso have been described as salty, sweet, earthy, fruity, and savory. High in protein and rich in vitamins and minerals, miso played an important nutritional role in feudal Japan. Miso is still widely used in Japan, both in traditional and modern cooking, and has been gaining worldwide interest.
—–

—–
Cheryl Paswater is a Fermentationist, Educator, Health Coach, Artist, Beekeeper, and Writer who after a near-death experience, turned to holistic medicine for help. After radical diet and lifestyle changes, she started studying and teaching on fermentation, old world food preservation, the human microbiome, food ethics, and holistic health. Cheryl runs a popular fermentation project called Contraband Ferments. She’s a contributing writer for Edible Brooklyn, has co-hosted the radio show Fuhmentaboudit!, is one of the organizers of the NYC Fermentation Festival, and is currently working on her first book. She lives in Brooklyn, NY with all her ferments (as pets).