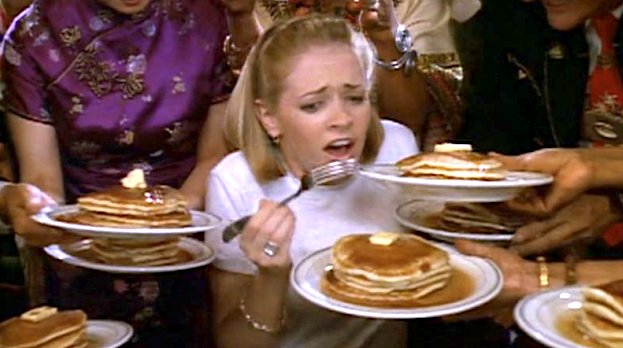 Dating back to the 16th century, Pancake Tuesday, aka Shrove Tuesday or Mardi Gras, is traditionally the day before the season of Lent, when Christians and Catholics are supposed to repent for their sins and then gorge themselves on fat and sugar before the fasting begins.

While we believe repentance to be optional, we’re very fond of pancakes and will take any opportunity to eat them for breakfast, lunch, or dinner. For Pancake Tuesday this year, local bakers Elysia and Sarah will be indulging in fluffy pancakes and teen movies (prepare for a punny menu and nostalgic playlist). It won’t be too sweet, we promise, and no repentance necessary.
—–

Besides being fans of 90’s teen movies, Elysia and Sarah have been baking your favourite treats at Bakerbots Baking for 7 and 3 years respectively. Elysia trained as a social worker and musician before realizing she’s supposed to be a baker and cake decorator. An avid traveler, she likes finding local holes in the wall with menus she can’t read. She can usually be found singing loudly while experimenting in the kitchen. Sarah trained as a piano technician, before making her way into baking, so I guess she likes repetitive manual labour a lot. She has recently begun a bread baking journey this past year working with Patti Robinson, at Robinson Bread, learning about long-fermented sourdoughs and homegrown whole grains. At home, she enjoys hosting campfire dinners for neighbourhood pals, and making lots of mistakes but never giving up.