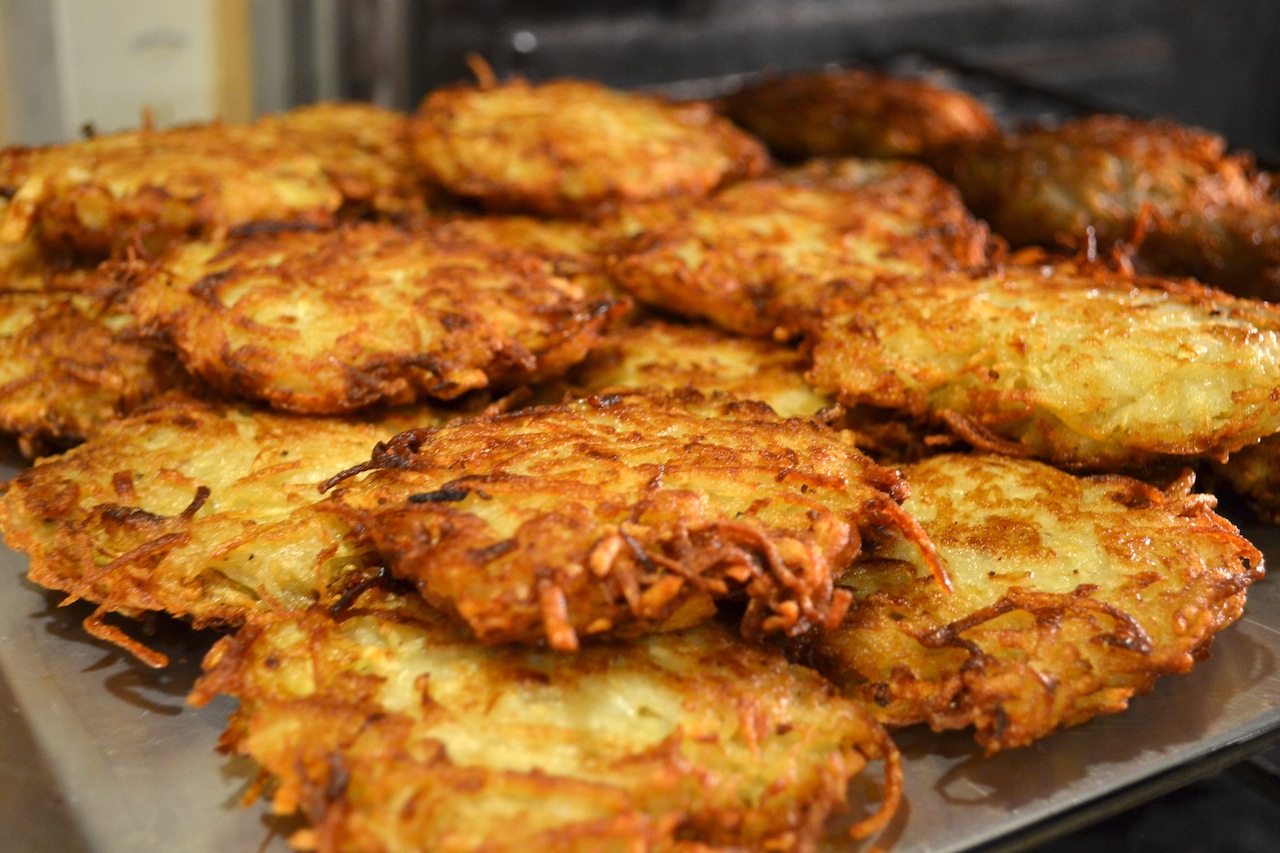 Greek and Jewish cuisine is not an especially common fusion, which is actually kind of odd, given the thousand-plus years of coexistence that they shared in antiquity, stretching back to at least 400 BCE. The ebb and flow of empires and diasporas severed ties and diverged paths, but some common threads remain — e.g. the tradition of leaning to the left during the Passover seder it considered by some to derive from the preferred leaning posture of reclining Greek & Roman nobles at their banquets… an emulation of the table manners of the ancient ruling class, emphasizing the luxury of eating like a free man vs. slave.

Tonight’s dinner is a Greek-Jewish fusion, prepared by Alissa Kondogiannis, a Greek-Jewish mash-up herself, equally inspired by classic Hanukkah treats and the Mediterranean flavours of Greece.

How about a side of fascinating discussion about Jewish music & identity?
Tonight’s dinner is presented in conjunction with our Table Talk: A Conversation on Jewish Music: Past, Present & Future with ­­­­­­­­­­­­­­­­Josh “Socalled” Dolgin and Tobaron Waxman.
—–

Lemony Lentil Soup
This lemony lentil soup is full of bright, zesty flavours. A family favourite at this time of year, this soup is a simple purée of red lentils, white onion and garlic with a splash of lemon.

Latkes
The main attraction at any Hannukah gathering, fluffy on the inside and crisp on the outside, latkes are made with grated potatoes, eggs, flour and onions. Fried to crispy perfection, they are good hot or cold.

Tzatziki
Greeks and Jews are interwoven in the Hannukah story, this meal represents that with the addition of Greece’s most popular Mezze dish. With cucumber, garlic, yoghurt and dill, it makes simple sour cream feel a little self-conscious. Available with tahini instead #vegan

Fried Eggplant Salad with Dill
Essentially a pile of garlicky fried eggplant with a tangy vinaigrette, this is the perfect Channukah “salad”. Layered with Aleppo pepper, shallots and dill and a hearty helping of olive oil, it only gets better with time.

Loukoumades
Sold in almost every cafe in Greece, with a zest of orange and a hint of cinnamon, these little doughnuts are drenched in honey syrup and make the perfect end to a Channukah meal. Available #vegan
—–

Thank you for your overwhelming enthusiasm for this event. Due to the tremendous interest, we have had to shut ordering early in order to be able produce enough to meet the orders that have been placed… Suffice it to say we are making several hundred lakes! Although we cannot make more food, I hope you might be able to join us for the Table Talk we are also hosting Wed night.

ORDERING FOR THIS EVENT IS NOW CLOSED. PICK UP IS WED 6-7:30PM

Although Alissa Kondogiannis is best known for her challahs, babkas and Friday-night Shabbat meals, she has been making delicious Greek food since she began her cooking career in the kitchen of a Greek restaurant in Johannesburg in the early 90’s. Today, you’ll find her running a small catering company in the north of the city and teaching challah and babka classes. Follow her on Instagram or Facebook @barnstarkitchen

PICK-UP DINNER: Feast From Out East by Chris Dunne

TABLE TALK: A Conversation on Jewish Music — Past, Present & Future
Scroll to top