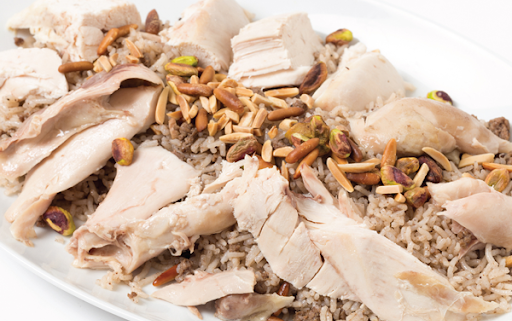 Chef Mary Freij, who ran The Dep’s popular Mazeh brunch in 2018-19, joins forces with & Lebanese Chef Sana Daoud for a meal of classic Lebanese comfort food as a fundraiser in support of the citizens of Beirut as they work to rebuild in the aftermath of the devastating explosion in early August.

The chefs will be donating all proceeds to relief efforts coordinated by Ahla Fawda, and The Dep will also contribute 10% its revenue.

When people in North America think of quintessential “Middle Eastern” food – things like hummus, falafel, shawarma – they are usually thinking of the food of the Levant, the region of the Eastern Mediterranean than ranges from Egypt through Lebanon, Jordan and Syria. One of the oldest culinary traditions in the world, it features dishes dating back from the time of Egyptian pharaohs and biblical figures to the Ottoman Empire right through to the present day; in many ways it is the foundational cuisine of the Western world.
—–

Hummus
Probably the best known of all Levantine dishes, hummus (“chickpea” in Arabic) has become a truly global phenomenon, as readily available in a Toronto supermarket as a Middle Eastern bazaar. A creamy, smooth dip of chickpeas and sesame tahini, seasoned with garlic and lemon, and drizzled with olive oil; served with fresh pita bread.

Ouzi
A classic Levantine pilaf; short grain Egyptian rice cooked in a flavourful chicken stock and garnished with seasoned ground beef, shredded chicken and toasted almonds.
–or–
Mujadara (vegetarian)
An ancient and hearty pilaf traditionally made with rice, lentils, and caramelized onions, a staple of peasants and kings alike.

Both come with a side of Khyar bi Laban, a combination of cool yogurt with garlic, cucumbers, and a touch of mint.

Namoura
A classic Levantine dessert, a rich buttery semolina and yogurt cake, garnished with almonds and drizzled with an orange-blossom infused syrup.
—–

Use the “ADD A TIP” feature on the product page or checkout to donate to support this fundraiser. 100% of all tips will be donate to relief efforts in Lebanon.

ORDERING IS NOW CLOSED FOR THIS EVENT. PICK UP IS FRI 6-7:30PM

Closed For a Short Break

Big thanks to Emily Zimmerman @pearandpepper, @the