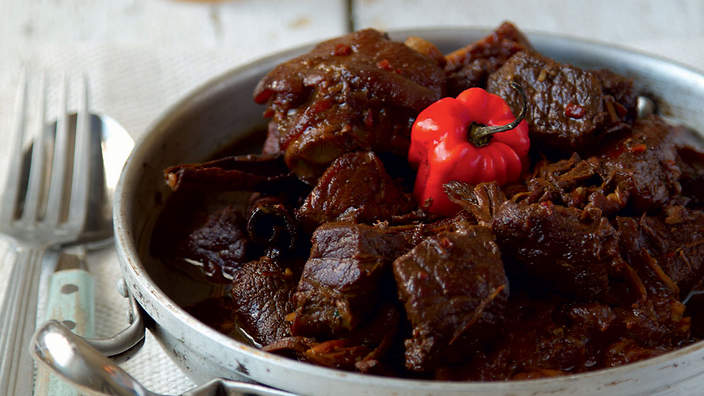 Guyana is a country of many identities. As the only country in South America where English is the first language, a legacy of British colonial rule, it often identifies mores closely to its Caribbean neighbours to the north. Like many ex-British colonies in the region, the culture — and the cuisine — is a mix of many influences: indigenous peoples, African slavery, Indian & Chinese indentured labourers, English institutions and the legacies of global trade.

Chef Eshwar “Chefwar” Sarwan creatively combines these inspirations to craft a cuisine rooted in Guyanese tradition, inspired by the flavours of the Caribbean, and elevated by his classically-trained French culinary technique.
—–

Oxtail Pepperpot
Traditional Guyanese pepperpot is usually reserved for special occasions because it take so long to cook, and so is often eaten during the Christmas holiday season in Guyana. A long, slow, flavourful braise, it is notable for its use of casareep (cassava molasses), a thick black sauce made from cassava root and local spices like cinnamon and cloves. In addition to adding a unique sweetness and rich, dark colour, it is considered to have tonic and antiseptic properties, and also acts as a preservative.

Curry Eddoe & Eggplant #vegan #GF
The legacy of over a century of emigrant, and often indentured, Indian workers have made the spices and dishes of the subcontinent an integral part of the fabric of many Caribbean cultures. This vegetarian dish emerges from that tradition, and showcases Chef Eshwar’s homemade garam masala spice blend. Eddoe (a root vegetable related to Taro root) and eggplant are braised in a coconut curry gravy, with a hint of sweetness complimented by the warm spices. Served with a golden turmeric rice pilaf studded with carrots & red peppers, homemade roasted garlic & herb naan, and a colourful medley of steamed seasonal vegetables tossed with shallots & thyme.

Guyanese Coconut Buns
Landing somewhere in texture between tea biscuit and cookie, this humble dessert is based on traditional ingredients, such as freshly grated coconut and raisins, but elevated with dark rum, crystallized ginger, and a blend of five spices.
—–

ORDERING FOR THIS EVENT IS NOW CLOSED. PICKUP IS FRI 6-7:30pm

Eshwar Sarwan is the grandson of the indentured labourers brought to Guyana from India. At the young age of eleven, he migrated with his parents and six of his eight siblings to Canada. From a very young age, Eshwar and his siblings worked alongside his mom whose food entrepreneur business that would support their family. By the time he graduated from high school, it was apparent that a love of food was part of his DNA.

After a successful career in Business Accounting, Eshwar returned to his passion for food and secured his Chef’s papers from George Brown. His tenacity in the kitchen earned him the nickname “Chefwar”, which became the name of his new catering enterprise and growing brand of hot sauces, condiments, and spice blends. Chefwar’s Kitchen features Caribbean-inspired flavours, where Guyanese home cooking meets classical French techniques; all infused with an abiding passion for food. Discover his products and services chefwarskitchen.com or follow on FB & IG @chefwarskitchen.