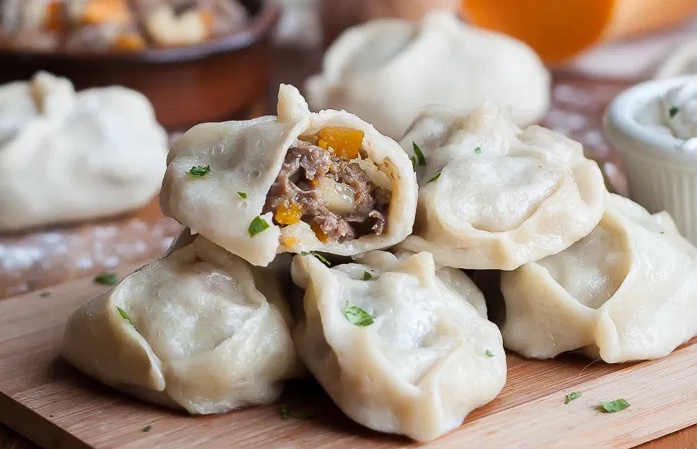 Kazakhstan occupies the heart of Central Asia, over a million square miles stretching from the Caspian Sea to Mongolia, bordering China, Russia and a handful of other nations. Home to nomadic tribes for centuries, and an important part of Genghis Khan’s Mongol Empire, traditional Kazakh food was simple and adapted to the nomadic lifestyle; horse meat prepared in different ways (as sausages or salted and dried), dried cheeses, breads and kumis, the national beverage made from fermented mare’s milk. Over the course of Kazakhstan’s modern history as part of the Soviet Union, and later as an independent democratic nation, it has absorbed many Russian, Ukrainian, German, Korean, Uighur, Tatar and other the influences to become a diverse, multiethnic country. Tonight’s dinner by Zhanar Khamitova showcases a typical contemporary Central Asian meal.
—–

Bayaldi Omara
Eggplant-based appetizers are popular in Central Asia; here slices of roasted eggplants are rolled around a filling of tomatoes and garlic mayonnaise and garnished with fresh coriander.

Jasimiq Sorpasi
Lentil soups are found across the Muslim world from the Middle East to India. This Azerbaijani-style one is a light vegetarian soup based on red lentils and celery, carrots, onions, tomatoes, seasoned with black pepper, paprika, cumin, and coriander, and served with a wedge of lemon.

“Korean” Salad
Generations of Koreans expats have resided in Kazakhstan and other Central Asian countries, and over time, their Korean dishes eventually became part of the local cuisine. Adapted to local ingredients, they have evolved into unique dishes distinct from their historical roots, but these flavourful and spicy dishes remain popular. A distant cousin of kimchi, this spicy marinated cabbage and carrot salad is flavoured with coriander, paprika, red crushed chillies, and garlic.

Manti
Though they share a name with their smaller Turkish relatives, these Central Asian dumplings are closer to Afghan mantu or Tibetan momos. Filled with meat and vegetables, manti are a holiday staple with the whole families pitching in to roll the dough, scoop the filing and fold the dumplings. Zhanar’s manti are filled with lamb, onions, butternut squash and seasoned with traditional spices such as cumin, coriander, and black pepper.
Also available #vegetarian with green lentils, onions, and butternut squash. Both are served with 2 sauces: a white yogurt, garlic and coriander sauce and a red tomato and bell pepper sauce.

Zephyrs
One of Zhanar’s specialities, zephyrs — a kind of soft, light and fluffy marshmallow — are popular treats in many former Soviet countries. They are made by whipping together fruit purée with egg whites, hot sugar syrup and agar. Three flavours will be offered with every dinner: mixed berries, chocolate, and vanilla.

Due to the high volume of orders, this event is SOLD OUT. Thank you for your support, and sorry for any inconvenience.

ORDERING FOR THIS EVENT IS NOW CLOSED. PICK UP IS WED 6-7:30PM

Zhanar Khamitova has been cooking all her life, feeding family, friends, and friends-of-friends to universal acclaim. Originally from Astana, the capital city of Kazakhstan, she studied baking in UAE, where she also exhibited her artworks before relocating to Toronto to be with her daughter, Fatima. They’ll be working together to put together this meal of beloved family recipes for The Depanneur.