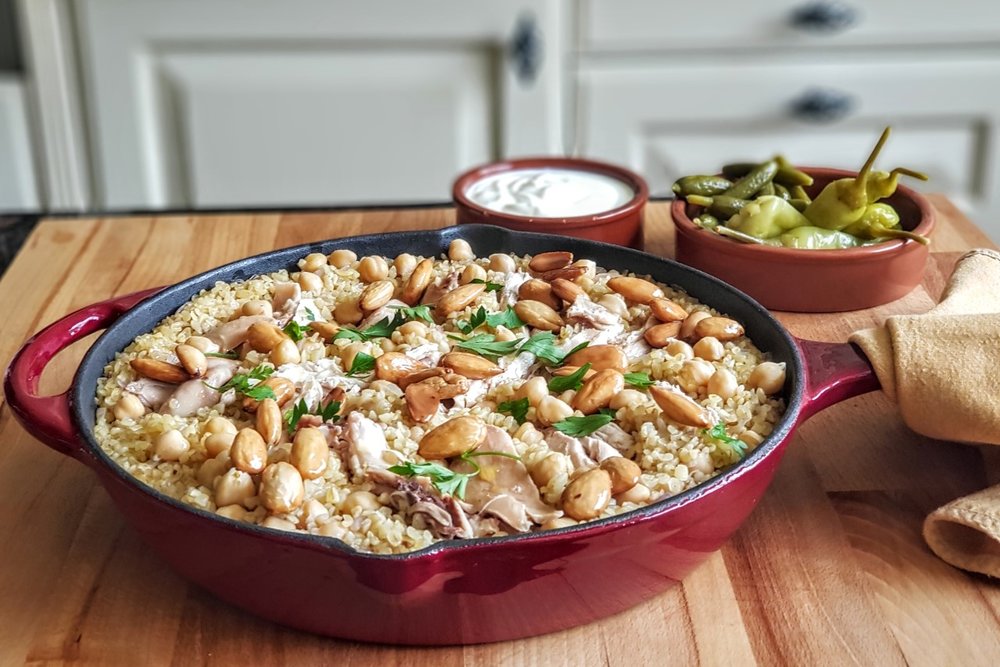 In early 2016, The Dep extended an invitation to Rahaf Alkabani, and her partner Esmaeel, to bring a group of newly-arrived Syrian women to our kitchen to make and share some familiar food. From this small gesture of hospitality would evolve Newcomer Kitchen and the beginning of a delicious, 3-year journey into the world of Syrian cuisine. Many things may have changed since then — Newcomer Kitchen has left The Dep to become its own non-profit organization, Rahaf and Esmaeel have embarked on an even bigger adventure, becoming parents to two beautiful children — but the food remains as delicious as ever. I’m delighted to invite Rahaf back to our kitchen for a dinner full of authentic Syrian flavours and warm memories.
—–

Baba Ganouj
One of the most famous and popular Middle Eastern mezze, this is a smoky eggplant dip with yogurt, tahini & garlic. The Syrian version is beautifully garnished with pomegranate molasses, pomegranate seeds, walnuts and parsley, and served with fresh pita bread.

Burgul Behommos
Burgul (aka bulgur wheat), is a dried cracked wheat that is an ancient staple in the Middle East. It is made from whole grain durum wheat that has been coarsely ground, soaked, steamed and dried (similar to ‘converted’ rice), a process that enhances its shelf life and nutritional profile. Burgul behommos is very old dish in Syria, especially in the city of Lattakia where it is often made for family gatherings and celebrations. Chicken and chickpeas are boiled with pearl onions and spices and set aside. The burgul is cooked in the rich chicken broth, before being re-combined with the chickpeas and topped with the deboned chicken and butter-fried almonds.

Also available #vegetarian, with sautéed mushrooms, spinach and a generous portion of chickpeas.

Served with khyar belaban, a cool and refreshing salad of cucumbers with yogurt, garlic and mint.

Basbousa
A golden, semolina-based cake that is soaked in an orange-blossom scented sugar syrup; the addition of yogurt and grated coconut gives it a rich, macaroon-like quality.
—–

Rahaf Alakbani is from from Sweida City in Southern Syria. Prior to her arrival in Canada in 2016 with her husband Esmaeel Aboufakher, they worked with various international organizations in Syria and Turkey as social workers and refugee advocates. A talented musician, Rahaf helped establish CultureLink’s Nai Syrian Children’s Choir, and is currently the founder and director of the Haneen Women Choir. In addition to her work for the Canadian Centre for Victims of Torture, Rahaf has also worked as a translator and interpreter for research studies about food and integration among refugees.