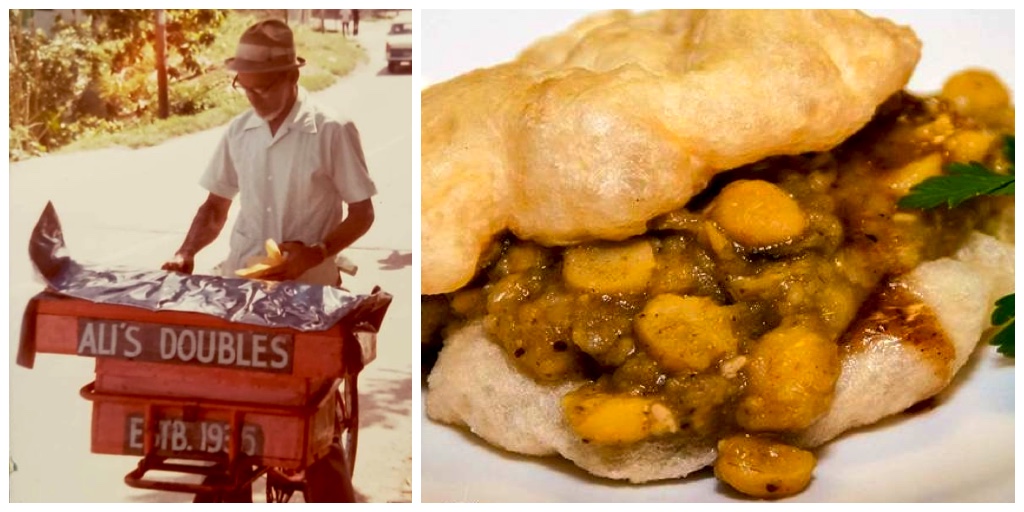 Caribbean flavours emerged from centuries of interaction between Carib, Arawak, African, East Indian, Chinese, and European cultures. Each island, with its own unique historical trajectory and individual culinary talents, developed distinct specialities, many of which are now beloved the world over. Nearly a decade ago Chef Avé Dinzey created Purple Hibiscus in Winnipeg’s French Quarter to pay homage to the culture, people, and history of the Caribbean, and carry on the culinary traditions that have run in her family for generations. Now based in Toronto, she offers a unique taste of the islands with an illustrious pedigree.
——

Ali’s Doubles
“There’s Doubles, and then there’s Ali’s Doubles!”
Ave’s grandparents and their siblings founded Ali’s Doubles in Princes Town in 1936, a beloved food tradition born on the streets of Trinidad & Tobago. Legend has it that when brothers Asgar Ali and Ashraf Choat Ali were selling their baras (fried flatbreads) and  channa (curried chickpeas) — for 6¢! — from their converted bicycle, hungry students would ask them to “double it up “ with an extra bara on top, and the name “doubles“ stuck around ever since. Since then Ali’s Doubles have become an iconic street food tradition in T&T, with generations of dedicated fans, and even their own musical tributes. Based on Avé’s grandmother’s original recipes, this is a very rare opportunity to enjoy real Ali’s Doubles right here in Toronto. Warm channa nestled between 2 baras, topped with tamarind & coconut chutneys, cucumber, and hot peppa on the side.

Geera Pork with Roasted Peppa Pumpkin Rice
Generations of islanders did their cooking on a chula, also known as a fireside, a wood-fired outdoor clay stove first introduced to Trinidad & Tobago in the late 1800s by indentured labourers from India. Choka is a cooking technique that involves fire-roasting, traditionally done on a chula, and remains symbolic of the flavours and memories of authentic home cooking.
In this classic island dish, slow-cooked chunks of pork are infused with the aroma of geera, (cumin), a legacy of the Indian influence in Trinidadian cuisine (that, and it is also the second most popular spice in the world after black pepper!) It is served with a savoury rice cooked with choka sweet peppers, pumpkin and coconut, as well as Green Bean Créolé (with local and seasonal beans straight from the farm) cooked with choka tomatoes, and Multani, a spicy condiment of smashed choka hot peppers and veggies.

Soursop Ice Cream
Soursop, also known as guanabana and graviola, is a favourite fruit throughout the Caribbean; tangy, fragrant and tropical, it makes an exquisite ice cream.
—–

Avé Dinzey was born in Princes Town, Trinidad & Tobago and migrated to Toronto in the late 1970s. She retired from Air Canada, where she worked as a Flight Attendant, to pursue her passion for all things food with Purple Hibiscus. For the last 10 yrs Avé has enjoyed what she describes as a “crazy-delicious” culinary adventure, with a restaurant, doing pop-ups, catering a variety of weddings and events, as one of the haCHere Collective, and in general being part of the very vibrant Winnipeg food scene. Having moved from Toronto to Winnipeg a couple decades ago, she has recently returned to her hometown and is looking forward to bringing her flavas to you! @_purplehibiscus