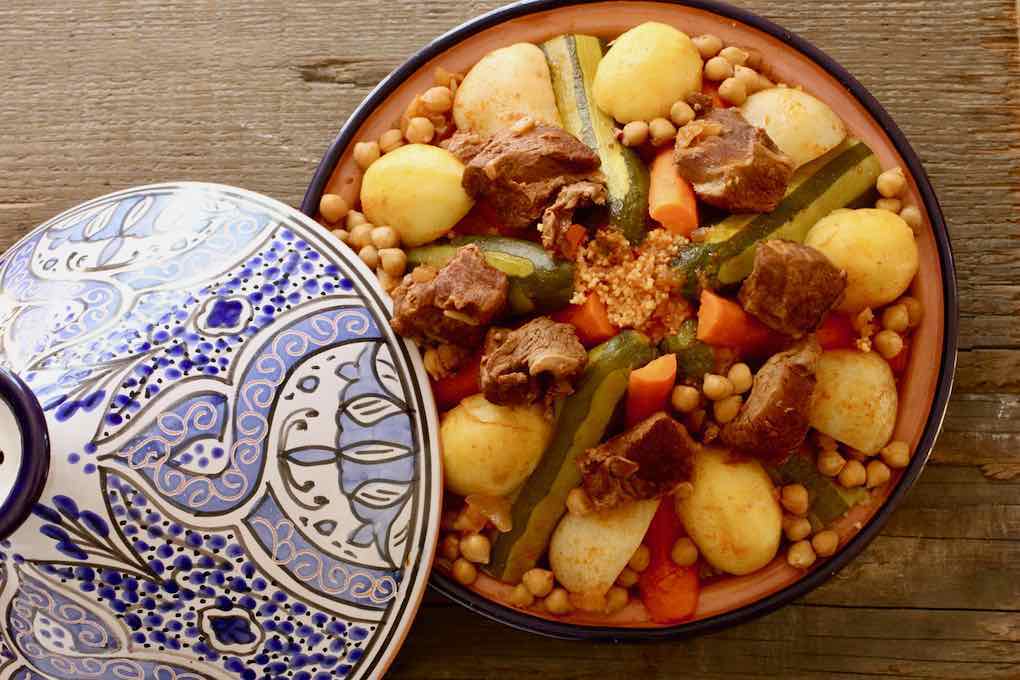 The cuisine of Tunisia is a blend of Mediterranean and Berber culinary traditions. Its distinctive spiciness comes from the many civilizations which have ruled the land now known as Tunisia: Romans, Vandals, Byzantines, Arabs, Spanish, Turkish, Italians (Sicilians), French, and the native Punics-Berber people. Cousins Zeyneb and Fatima bonded in Toronto over their shared love of traditional Tunisian food, and are excited to share this classic couscous, a labour-intensive, time-consuming dish often reserved for special occasions and big family gatherings.
—–

Slata Mfawra
Literally ”steamed salad“, this is a kind of Mediterranean potato salad, a mix of cubes of steamed potatoes, carrots, green beans and peas, drizzled with olive oil and garnished with hard boiled eggs, olives, and parsley.

Tunisian Couscous (halal beef -or- vegetarian)
Probably the best known dish of Berber origin, popular throughout the Maghreb region of North Africa. Traditionally rolled and sifted by hand, these tiny grains of semolina pasta were made from hard part of the durum grain that resisted the grinding of the millstone, a skill recognized as part of UNESCO’s Intangible Cultural Heritage of Humanity. Though now available in supermarkets worldwide, authentic, light, fluffy couscous still requires skillful preparation by steaming in a couscoussier, a specialize 2-tiered pot that cooks the grains in the fragrant steam of the bubbling stew below. This Tunisian recipe features the couscous served with large chunks of zucchini, carrot, potato and onion simmered with chickpeas in a broth infused with caraway, pepper and the complex heat of homemade harissa, made from smoked, sun-dried chiles. Served with or without cubes slow-cooked halal beef, which has been braised separately.

Makroud
A delicious, buttery date-filled semolina cookie cut into a characteristic diamond shape from which the name derives. The baked cookies are dipped in the a honey syrup scented with orange blossom water.
—–

Zeyneb Rejeb and Fatima Khlifi are cousins, but grew up in two different countries; Zeyneb in Tunisia and Fatima in France. Zeyneb joined Fatima in Toronto with her family to do her PHD at the University of Toronto. Despite living far apart, they were connected their Tunisian roots and memories of spending summer holidays together in Tunisia. Zeyneb, an experienced Tunisian cook, and Fatima started gathering friends to share enjoy and these North African dishes rarely found in Toronto. You can follow the cousins on Instagram: Zeyneb @Zeynouba_ben_rejeb and Fatima @FatiCookInMix where she focuses on cooking international foods using a Thermomix