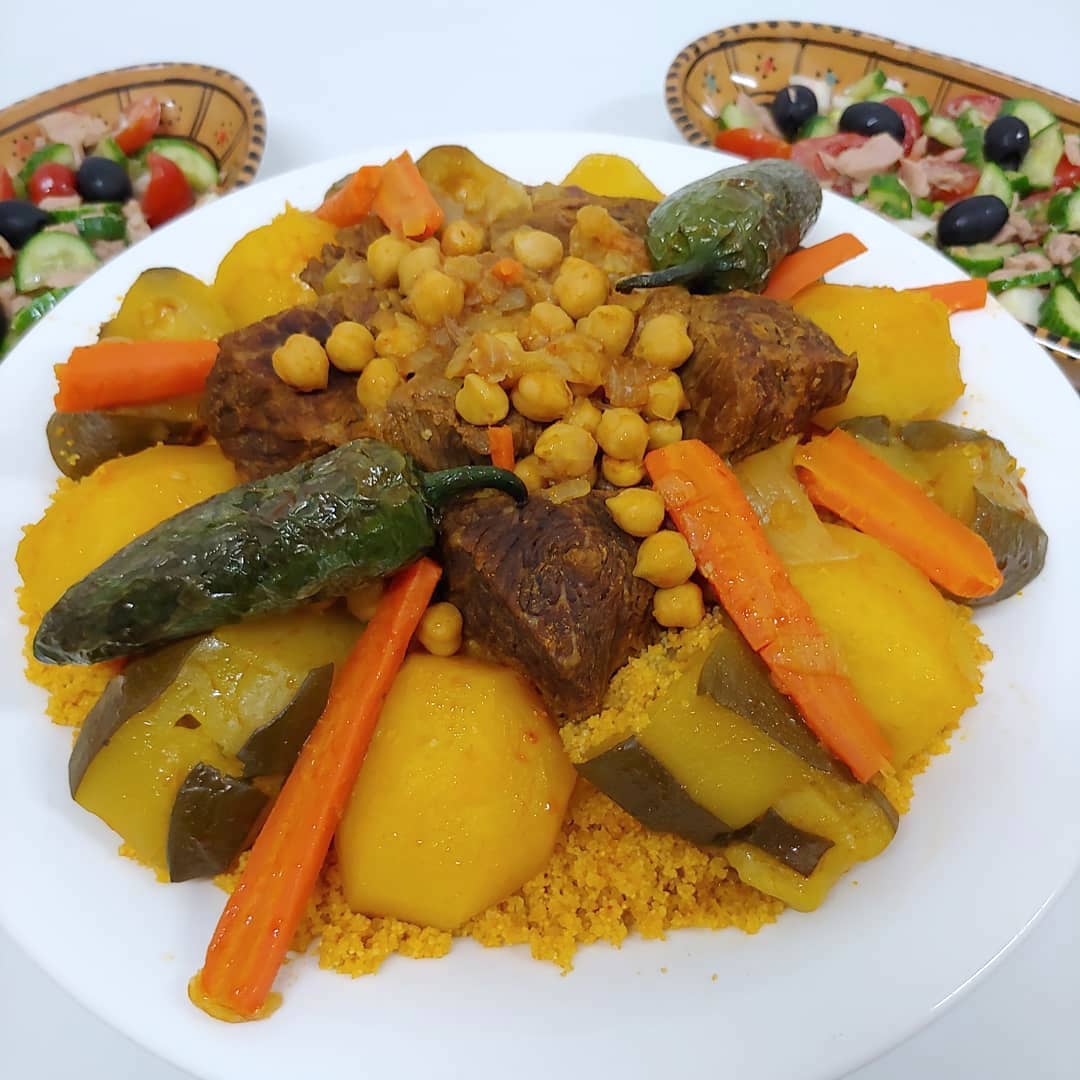 The food of Tunisia is a blend of Berber and Mediterranean cuisines, written over the course of thousands of years by the many civilizations which have left their imprint on the land: Roman, Vandal, Byzantine, Arab, Spanish, Turkish, Sicilian, French, and the native Punic-Berber people. Many of the ingredients would be familiar on both sides of the Mediterranean, but are assembled in a way that reflects a manifestly Tunisian sensibility. Tonight, cousins Zeyneb Rejeb and Fatima Khlifi share a few distinctive dishes that would typically be served during traditional family gatherings.
—–

Kafteji
A uniquely Tunisian dish, sitting somewhere between a stir-fry and a ratatouille. A mix of vegetable peppers, tomato, onion, potato and pumpkin are sautéed with eggs and delicate spices, and served as a room-temperature salad.

Tajine
Although this shares its name with the well known Moroccan stew (and the conical earthenware dish it is traditionally prepared in), the Tunisian dish is entirely unrelated. Tunisian tajine is a closer relative of the Spanish tortilla or Italian frittata: a large, slow-cooked omelette made with eggs, chicken, potato, onion, parsley, and a blend of cheese, and a hint of turmeric; cut into squares, it is served as part of a course of mezze appetizers. Also available #vegetarian

Tunisian Couscous
Couscous, a small grain-like semolina pasta is found in countless variations across North Africa. In Tunisia, it is popularly served with a braise of large chunks of potato, carrot, zucchini, onion, and chickpeas, seasoned with paste of garlic coriander seed, and spicy homemade harissa, a paste of red chilies, garlic spices and crushed orange leaf. Available with stewed halal beef, or all #vegetarian.

Makroudh
Perhaps the noble ancestor of the fig newton, this traditional Tunisan sweet is made with semolina dough wrapped around a date filling, cut into small diamonds and being fried until golden, then soaked in a fragrant sugar syrup.
—–

ORDERING FOR THIS EVENT IS NOW CLOSED. PICK-UP IS FRI 6-7:30PM

Zeyneb Rejeb and Fatima Khlifi are cousins, but grew up in two different countries; Zeyneb in Tunisia and Fatima in France. Zeyneb joined Fatima in Toronto with her family to do her PHD at the University of Toronto. Despite living far apart, they were connected their Tunisian roots and memories of spending summer holidays together in Tunisia. Zeyneb, an experienced Tunisian cook, and Fatima started gathering friends to share enjoy and these North African dishes rarely found in Toronto. You can follow the cousins on Instagram: Zeyneb @Zeynouba_ben_rejeb and Fatima @FatiCookInMix where she focuses on cooking international foods using a Thermomix.