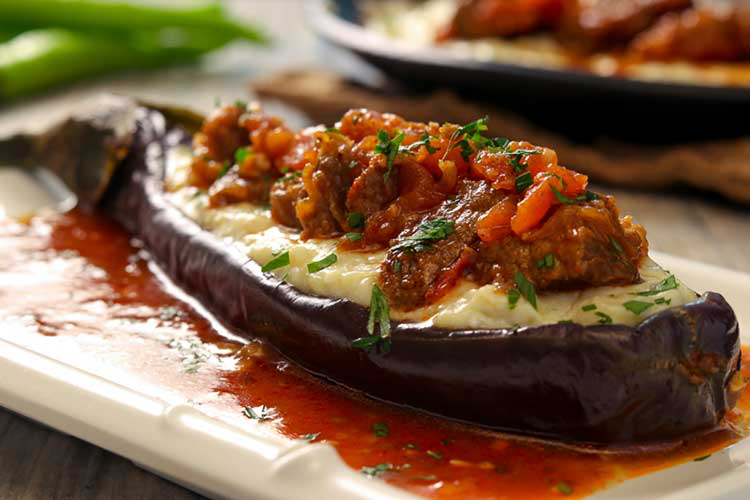 Turkey has an ancient culinary tradition stretching back to the very beginnings of Western civilization. It was on this solid foundation that the Ottomans developed a sophisticated and aristocratic cuisine based on ingredients and influences pulled from an empire that stretched from North Africa across the Middle East and into Greece and the Balkans. The flavours of contemporary Turkish food emerge from this mix of cultures and traditions, and shine in Chef Tuba Tunç’s selection of traditional Turkish dishes.
—-

Leek & Squash Börek
Böreks – stuffed pastries – were very popular in Ottoman Empire, and can still be found in almost all places it touched; they also became a beloved part of Mizrahi and Sephardic Jewish traditions. This version uses yufka pastry – paper thin, but a bit more substantial than Greek phyllo –  rolled around a savoury mix of melted leeks and golden squash, and baked.

Hünkâr Beğendi
Hünkâr beğendi — “Sultan’s Delight” — is one of the most well known Ottoman dishes, with historic roots in the court cuisine of the Ottoman Palace. It is one of the best-loved eggplant dishes in Turkey — no small feat considering there were some 360 eggplant dishes in old Ottoman records. Slow-cooked cubes of beef in an aromatic tomato and red peppers sauce, served over eggplant puree enriched with béchamel sauce, attractively plated in the hollowed eggplant.
Also available #vegetarian with stewed mushrooms.
Served with Domatesli Bulgur Pilavı, a pilaf of cracked bulgur wheat flavoured with tomatoes, onions and Turkish pepper paste.

Irmik Tatlısı
Semolina – a fine meal of milled wheat, also known as farina – has been used in Turkey for thousands of years, hardly surprising given this is where wheat culitvation first began. From here it has become an essential ingredient worldwide, the basis of everything from pasta to couscous to Persian and Indian halwa desserts to “Cream of Wheat” in North America. This traditional Turkish semolina pudding, simply made with a milk, butter, sugar and vanilla, is topped with chocolate sauce and fresh berries.