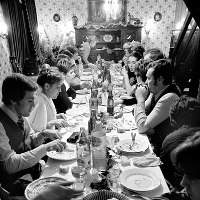 Robin “Squiggy” Dutt is holding his first public Squiggfeast since returning from a year and half of cooking in La Belle Provence! For the theme of the night’s menu, Squiggy will be looking to traditional french cuisine for inspiration, but then of course, putting his own delicious spin on things.

—–
Tuna nicoise salad
While there is ongoing debate about what truly belongs in a nicoise salad (should there be potato? egg? capers?), there are the uncontested elements that everyone knows and loves: olives, tomatos, anchovy, garlic. Squigg will be taking his own spin on this salad, not only furthering the debate of whether or not to include the controversial potato, but also playing with textures.

Chicken Ballatine with duxelle
A ballantine is when meat is deboned and stuffed with a filling. In this case the filling is duxelle, which is a mixture of mushrooms. Here Squiggs will be taking you mushroom foraging deep into the forest with the elements of this dish. Served with roasted mushrooms, smoked apples and roasted onion puree

Croqueembouche
A croqueembouche is an towering arrangement of cream filled profiteroles (cream puffs) and spun sugar. On this night, the croqueembouche will be constructed in the theme of classic coffee and donuts.
—–

After 6-years in theatre production, Robin “Squiggy” Dutt stepped away from the stage and into the kitchen. He followed his love of food back to the Chef Training program at George Brown, and after graduating, ventured to Montreal to stage in various kitchens and gain experience in many culinary styles. Today, we find him honing his craft back in Toronto, in the kitchen of the Drake Hotel. When he’s not at work, he is still in the kitchen, further defining and sharing his own style of cooking through a series of private and public functions under the brand Squiggfeast.

This event is SOLD OUT! Congrats Squiggy!