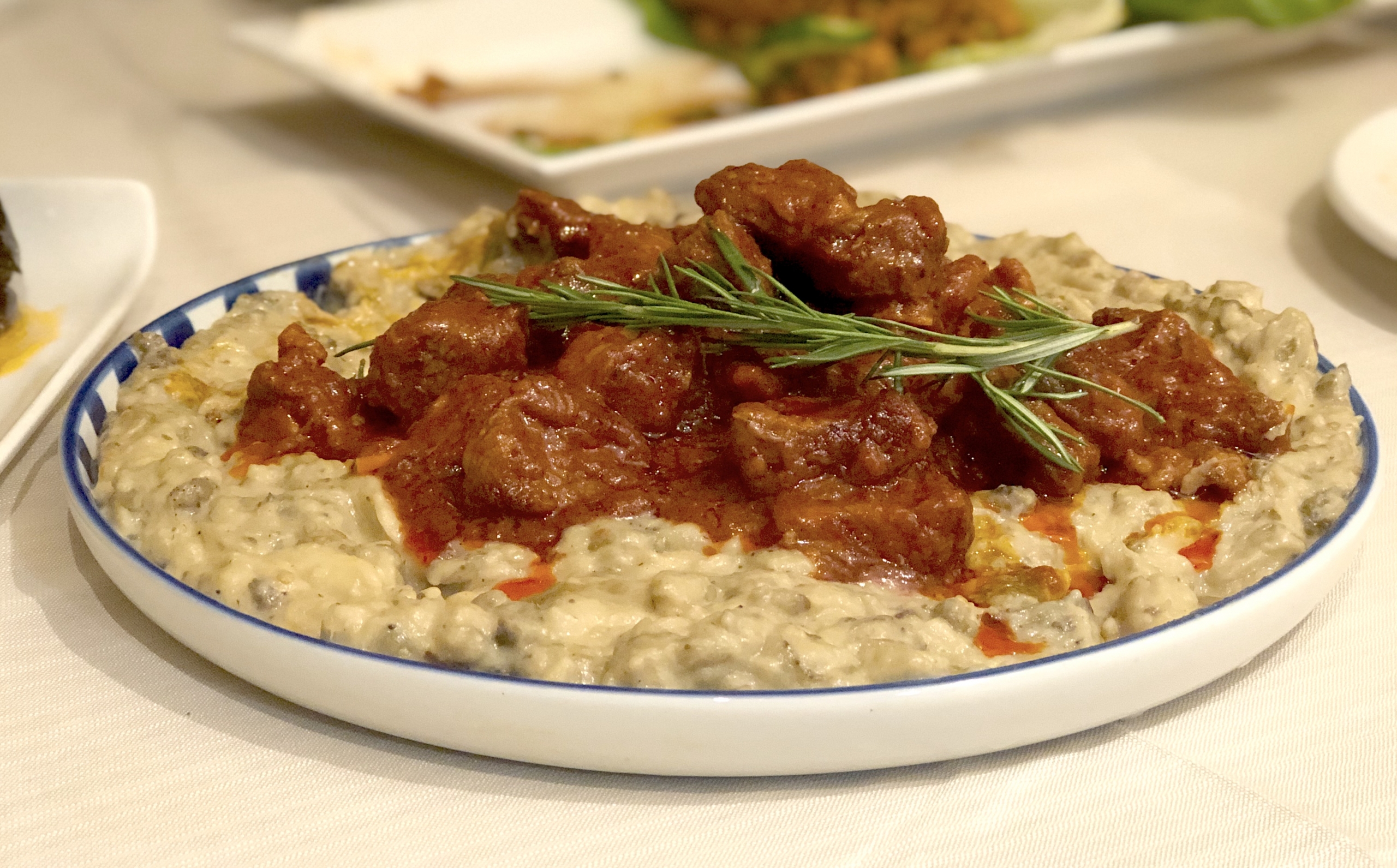 Anatolia, the region that is now largely the modern country of Turkey, has a Levantine culinary tradition stretching back to the very birth of modern Western civilization. From the 14th up until the early 20th centuries the Ottoman Empire, based in Constantinople (now Istanbul), developed a sophisticated and aristocratic cuisine based on ingredients and influences pulled from an Empire that stretched from North Africa across the Middle East and into Greece and the Balkans.

Tonight’s menu, prepared by Turkish Chef Tuba Tunç showcases a combination of traditional Turkish (Anatolian) and Ottoman dishes. It is a homage to the food of her home city, as well to her mother and grandmothers, amazing cooks who passed on many recipes that had been in the family for centuries.
—–

Acili Yoğurt Çorbası — Spicy Yogurt Soup
One of the most popular traditional soups in Turkey, and an old family favourite, enlivened with a hint of spicy pepper paste (biber salçası), and garnished with butter and mint sauce.

Sigara Böreği — Cigar Rolls
Deep-fried rolls of yufka — a very thin round, unleavened flat bread — stuffed with feta cheese and parsley, and served with tomato sauce. Sigara Böreği are a must-have for tea parties where neighbours, relatives and friends come together. Every neighbourhood in Istanbul has its own local bakery that makes fresh yufka daily.

Hünkâr beğendi — “Sultan’s Delight”
Slow-cooked cubes of beef in tomato sauce, served over eggplant puree enriched with béchamel sauce. Hünkâr beğendi is one of the most well known Ottoman dishes, with historic roots in the court cuisine of the Ottoman Palace. It is one of the best-loved eggplant dishes in Turkey — no small feat considering there were some 360 eggplant dishes in old Ottoman records.
Available #vegetarian on request

Irmik Helvasi — Semolina Halva
Semolina halva – a traditional Turkish sweet somewhere between a cake, a pudding and a fudge – stuffed with vanilla ice cream, and garnished with pine nuts and a drizzle of chocolate sauce. Irmik Helvasi is a delight of sad and happy occasions. Roasting halva is a ritual when someone you love passes away; friends and family gather around the pot of halva and say a prayer as they stir. It is a way of saying goodbye to someone you have lost, to say what you may not have been able to say; a quiet ritual that offers peace and calm. I decided to make this dessert to honour my mother who recently passed away.
—–

——
Tuba Tunç was a marketing professional in Istanbul for 10 years, but her true passion has always been cooking. Through countless dinner parties for friends and family, she came to realize that she needed to follow this passion and turn it into a career. Tuba moved to Canada and enrolled in the Culinary Management Program at George Brown College — it was a challenge to make the change from high heels to chef shoes, but she thrived! Since graduating, she has worked in various positions at restaurants such as El Catrin, Mercatto, 7 Enoteca, Capocaccia, Vertical, Oretta, and most recently, managing Anatolia, one of the oldest Turkish Restaurants in Toronto. After her time there, Tuba decided to continue her journey by founding LokumEats, where she showcases Turkish & Ottoman cuisine, as well as her take on international cuisines.

—–
Every weekend The Depanneur invites a guest chef to host a fun, family-style dinner party.
Learn more about Supper Club’s at The Depanneur