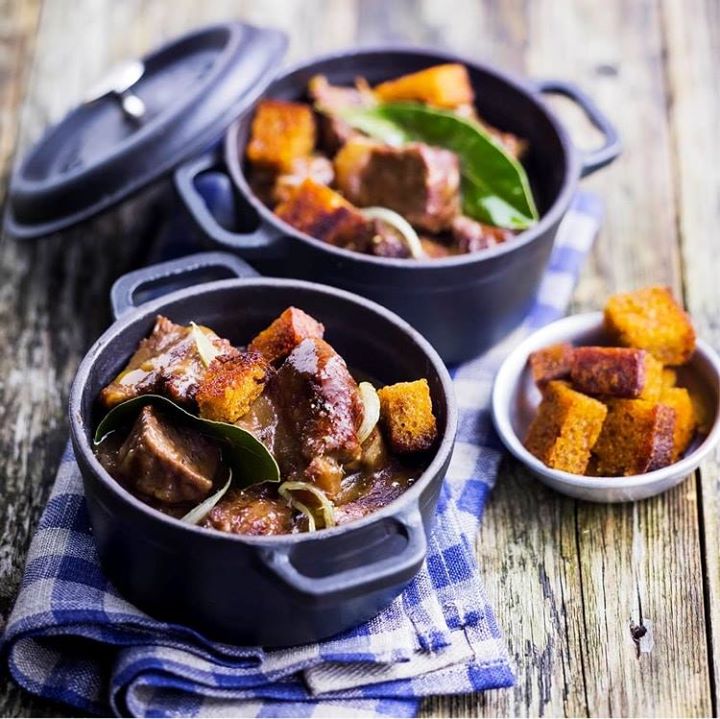 This April marks the 100th anniversary of the Battle of Vimy Ridge — immortalized in the memorial poem “In Flanders Fields” — a key moment in WWI that cemented the deep connections in French and Canadian history. It took place in Nord-Pas-de-Calais, the northernmost department in France, in between Belgium and the Pas-de-Calais (Straights of Dover), so it would not be any surprise to find English and Flemish influences in the local food.

The character and dialect of North got a boost from the popularity of a 2008 comedy “Bienvenue Chez les Ch’tis” (Welcome to the Sticks), which went on to become one of France’s most successful films, adding to the legacy of this part of France known for its coal mines, majestic buildings, grim weather and friendly people — a famous song says that the people here “have in their heart the sun they don’t have in the sky”. Beef, cheeses and beers feature prominently alongside fish from the La Manche (English Channel). Tonight Chantal shares a selection of the hearty dishes and specialties of this region.

—–
Le Welsh
Welsh rarebit, as one might guess, originated in Wales, but has become something of a signature dish in the North of France, taking advantage of the excellent beers, bread and cheeses of the region… Strong cheese, mustard and beer are combined into a hearty sauce that is poured over bread and broiled until bubbling and golden.

Endives and Mimolette Velouté
Belgian farmers originally introduced endives (leaf chicory) to this region; the area is now the number one producer in the world. It is widely used: raw, boiled or grilled to enhance its slightly bitter but delicate taste. Here it is topped with a creamy velouté and Mimolette (literally ’half-soft’, mi-mou), one of the star local cow cheeses. Round and orange, this cheese shows its Dutch influences.

Herring Tartar and Beet Salad
Smoked or marinated, herring has long played an important role in the cuisine of the North of France, being nourishing and easy to preserve. This salad of herring tartar is served with sweet red beets, another famous local product.

Carbonade Flamande
Much like the classic boeuf bourguignon of the South, but made with the excellent beers of the area instead of wine, is it popular throughout Belgium and Holland. The Dutch played an important role in the European spice trade, so spices like cloves, nutmeg and anise appear in many cakes and cookies. Some traditional flamande recipes incorporate pieces of spiced gingerbread to add complexity and sweetness.

Chou Rouge à la Flamande
Red cabbage is slowly braised until meltingly tender, sometimes with a bit of apple and vinegar to enhance the sweet and sour flavour profile

Sorbet Café Chicory and Speculoos
It is said that “In the North there’s always a percolator on the fire” — « Dins ch’nord, y’a toudis eun’alambic sus ch’fû » in the local dialect — which speaks to both the ubiquity of the beverage and the culture of sharing a cup at any social opportunity (much like tea in England). When Napoleonic France could not receive coffee from its colonies due to the British blockade, roasted chicory root was a common substitute. It is still widely consumed, blended with or instead of coffee, for a lighter beverage that helps with digestion. This coffee & chicory sorbet is a delightful palate cleanser, served with Speculoos, a crunchy little spice cookie popular throughout Flanders, Belgium and the Netherlands.

Tarte au Sucre
An iconic dessert from the area is sugar pie — much like what we in Ontario know as a butter tart, and a treat that is still popular throughout Quebec — but traditionally made with vergeoise (or cassonade), a special brown sugar made from beets; another Napoleonic innovation

—–
Chantal Véchambre, originally from Paris, is a chef certified in both French cuisine and pastry-chocolate. In 2005 she moved to New Brunswick where she began her own business as caterer. Her independent research in culinary history led her to the Fortress of Louisbourg (Nova Scotia), a National Historic Site of Canada, where she developed new recipes for the site’s restaurant, and culinary workshops to the public, inspired by the 18th century recipes. She wrote the award-winning book French Taste in Atlantic Canada, 1604-1758, A gastronomic history (CBU Press), featuring ingredients and recipes of the colonial period. Now established in Toronto, she pursues food writing and cooking ventures about French cuisine: supper clubs, events, private and corporate catering, as well as ongoing research into Canadian and French culinary history.
http://www.chantalvechambre.com/
http://www.mycremecaramel.com/