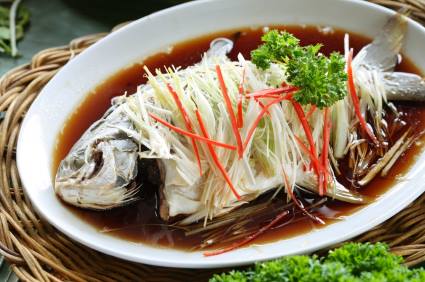 This Chinese New Year’s Banquet combines Lejen Chen’s cherished memories of cooking and celebrations growing up in a Chinese family in Brooklyn, with insights gleaned through her extensive travels across China researching heritage seeds, livestock and traditional Chinese foodways. Lejen is passionate about sharing the abundant food culture of China, and trying to do so as organically, seasonally and locally as possible — all Chinese foods were originally organic, even if this has become harder to find today.

Lejen has selected some favourite comfort foods that she grew up eating, dishes perhaps less familiar as “Chinese food” than what’s typically found in restaurants in West, such as baked sweet potatoes, or a steamed savoury egg custard. This menu is also a synthesis of what one might find on the dinner table across China, from the southwest to northern and southern provinces. Through sharing this festive holiday meal, she hopes to create some of the same sense of excitement and celebratory spirit she experienced as a child.

Roasted Sweet Potatoes
A classic Beijing street food typically sold in winter from bicycle vendors out of old oil drums converted into ovens; you select your potato and pay by weight. A perfect way to warm up your hands on a chilly winter day. These are local, organic potatoes from Round Plains Plantation.

Chicken Goji Berry Soup
This particular soup is a speciality of Yunnan province; it is slow-cooked in a special clay pot made only in Yunnan. It is Lejen’s favorite chicken soup; a clear, ginger-scented broth with tender, slow-cooked organic chicken and goji berries. (Despite their newfound popularity in the West as a healthy snack, in China goji berries are always prepared in tea or soup).

Chinese “Porchetta”
Lejen’s version of classic Chinese crispy roast pork featuring organic, local meat from Marvelous Edibles. Seasoned with a classic Chinese 5-spice blend, the pork is first cooked slowly at low temperature for juicy, tender meat, then under high heat for ultra-crispy skin, and served with a sweet 7 savoury hoisin sauce. This dish is being served in the porchetta burritos at Lejen’s restaurants in Beijing.

Steamed Egg Custard
This is Lejen’s version of a Chinese comfort food that her mom makes for all her grandkids with homemade chicken stock and organic eggs.

Steamed Whole Fish
Steamed with ginger, scallions, bean sauce and shrimp paste, this is an iconic Chinese New Year’s dish. There’s a Chinese saying “Niannian you yu” which literally translates to “abundance with each year”; since the word for abundance sounds the same as the word for fish, Chinese celebrations almost always feature a whole fish.
(Type of fish will depend on what’s freshest)

Stir-fried Fresh Greens
Pea sprouts with garlic or canola greens with oyster sauce, depend in on what is fresh on the market. (Unfortunately, it’s unlikely to find these organic at this time of year).

Jiaozis (“Water Dumplings”)
On New Year’s Eve in Beijing these tender boiled dumplings with a beef or pork filling and a soy & vinegar dipping sauce are often eaten at midnight after the conclusion of the New Year’s show on Chinese central TV.

Chinese New Year’s Cake
A simple sweetened sticky rice cake prepared throughout China in a variety of shapes, this particular one is in the style of the Canton region. Lejen’s version also now reflects a Canadian influence, using maple syrup in addition to brown sugar, ginger and cinnamon. Slices are dipped in a light batter, pan-fried, and garnished with sesame seeds.

—–
A Chinese-American native of Brooklyn, NY, Lejen Chen returned to China to open Mrs. Shanen’s, Beijing’s first bagel bakery! Dismayed by the difficulty of sourcing local organic produce and dairy, she went on to found Green Cow Farms, an organic farm and CSA that supplies her two popular Beijing cafés.