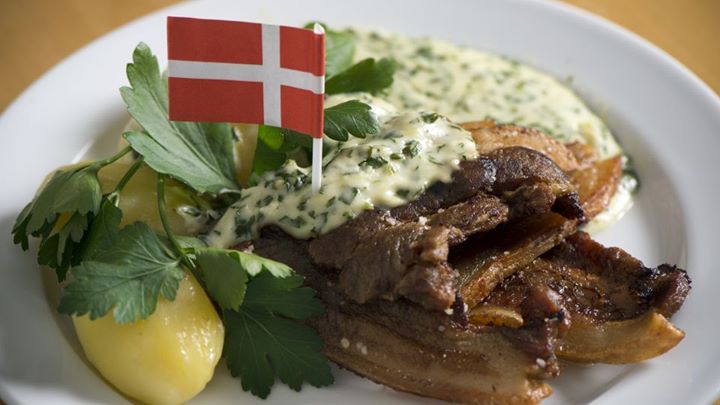 Danish food culture and culinary heritage has been cultivated over many generations and is mainly rooted in the old country kitchen. These traditional recipes have come from all over the Danish kingdom, a kind of comfort-food shield to protect the Danes against the cold weather.

The long winters and short growing season are why the Danes for centuries have traditionally eaten a lot of meat – notably pork – but also beef. With its expansive coastline, seafood also figures prominently, along with the rye breads and beers that have been daily staples for thousands of years. Later, potatoes and heavy gravies became common supplements to fish and meat dishes.

Danish cuisine has recently become more widely known internationally as NOMA in Copenhagen became recognized as one of the best restaurants in the world. Tonight’s menu is not quite what you would find at NOMA (whose 17-course tasting menu will run you $250+ USD and several months wait!). Rather, Rune Nielsen with help from his friend Minu Mark, have prepared a sampling of some of the kinds of traditional Danish dishes you’d find likely in people’s homes.

—–
Reje Cocktail
A shrimp cocktail/salad mashup made with poached shrimp, fresh greens and herbs, and a creamy mayonnaise-based dressing with citrus, paprika, mustard, and tomato.

Forloren Hare (“Mock Rabbit”)
A Danish beef and pork meatloaf, stuffed with onions and spices and wrapped in bacon. Served with carrots, peas, and a simple salad of cucumber, tomatoes and bell peppers.

Drømmekage (“Dream cake”)
Vanilla sponge cake encrusted with a coconut and brown sugar topping. In the 60’s a woman named Jytte Andersen from the small town of Hjallerup won a baking contest with this recipe, which eventually went on to become one of the most well-known cakes in Denmark.
—–

—–
Minu Mark is ardent traveler and enjoys trying and preparing cuisines from all over the world. She found her passion in baking cakes, muffins and pastries and is currently pursuing a certificate in cake decorating. She recently started Chez Minu and hopes to own a store some day. https://m.facebook.com/chezminu

Rune Nielsen is a guinea pig when it comes to food. He loves experimenting with new cuisines, ingredients and preparation styles. Sometimes he succeed, other times he learns. One of his dreams is to own a healthy gourmet restaurant serving and educating people about healthy food.