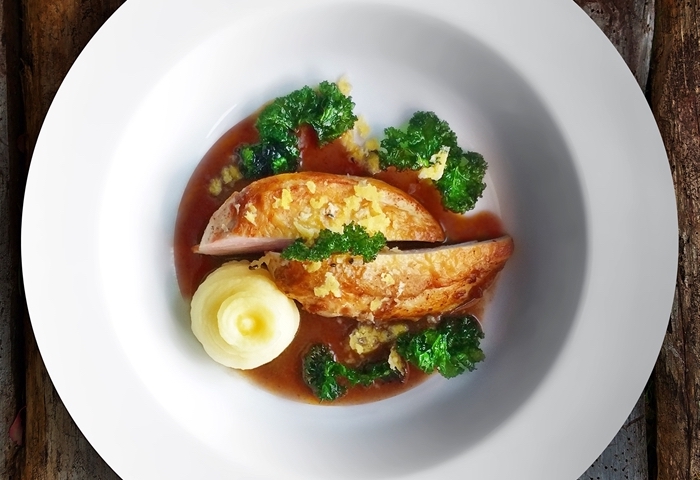 The city of Bordeaux, in the Gironde department in Southwestern France, is considered one of the country’s most beautiful cities; it is on the UNESCO World Heritage List for its 18th century architecture. After Paris, Bordeaux has the highest number of preserved historical buildings of any city in France. Bordeaux is also famous for its eponymous wine, which has been produced in the region since the 8th century. Bordeaux remains a global force in the wine industry, and is home to Vinexpo, the world’s largest wine fair. It will come as no surprise that a region so famous for its wines would have plenty of culinary treasures to complement them.
—–

Mushrooms Farçi
In Bordeaux cèpes are a popular foraged and cultivated mushroom, often stuffed with smoked ham, shallots, parsley and broiled. In Canada cèpes are exceedingly rare and expensive, but we have Portobello mushrooms that share a similar density and same earthy flavour.

Velouté de Moules
Being situated close to the ocean, and along the Garonne seaway, mussels are ubiquitous in the region. Here they are showcased in a delicate and unctuous creamy soup, seasoned with a julienne of carrots, leeks, fennel, all supported by garlic, onions and white wine.

Aiguillettes de Poulet avec Sauce Bordelaise
The term “Bordelais” may also refer to the city and its surrounding region, but is perhaps best know as one of the well known classic French sauces. You would be hard pressed to not find it on every restaurant menu within 50 miles of Bordeaux. The Bordelaise is classic, deep rich combination of French flavours: red wine, butter, marrow and herbs, tonight complementing delicate chicken aiguillettes (thin, tapered cuts of breast), along with small baby potatoes finish with Fleur de Sel, the hand-harvested artisanal salt of the French ocean coast.

White Lillet Granita
Lillet is a refreshing aperitif, a blend of white wine, bitter orange and spices, created near Bordeaux in the late 19th century that became especially popular in Europe’s Roaring Twenties after the First World War. It was introduced to America in the 50’s by various celebrities and aristocrats, where it remains a staple of a well-stocked bar. Tonight it is served as a frozen granita for a refreshing palate cleanser.

Macarons Saint Emilion
Here in North America, the Ursulines nuns are famous for founding the first school for girls in the 17th century. In France, a lot of specialty foods were created by religious orders. The Ursulines created the macarons of Saint Emilion in the 18th century. You can find others macarons in many regions in France, all slightly different, but those of Bordeaux, perhaps unsurprisingly, incorporate sweet wine..

Cannelés de Bordeaux
Another creation associated to the religious ladies of Annonciades, is this caramelized pastry that was a favorite of the local bourgeoisie of the 1930’s. The name concerns the “cannelures”, the distinctive fluted column shape, whose origin is not very clear. You will find them today in all the best pastry shops of Bordeaux, still baked in traditional copper molds. A kind of pastry cream batter is baked until caramelized all around but still soft inside, and infused with a hint of rum, a souvenir of colonial trade with the West Indies.