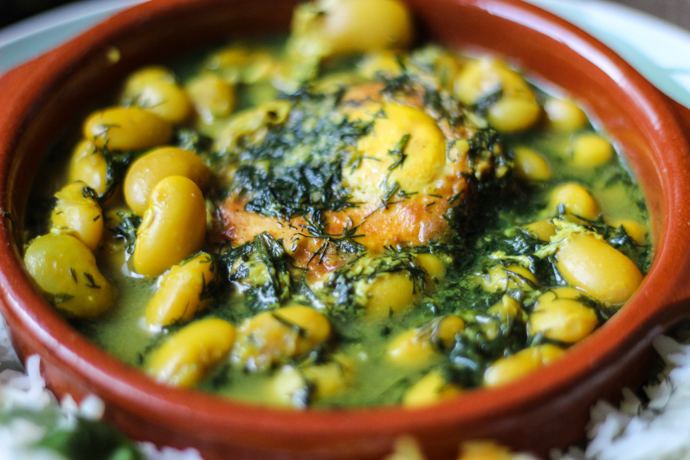 Many cultures have developed and elevated the idea of ‘bar food’ — dishes meant to be shared with friends overs drinks — into a delicious cuisine all its own: think Spanish Tapas or Pintxos, Japanese Izakaya, or the Shao Kao of Chinese night markets.

For this upcoming dinner restaurateur Pouria Lofti has crafted a menu that’s a dialogue between Iranian home cooking and bar food. Back in Iran, eateries serve food people typically don’t cook at home like kebabs, offal, and pastries. Since there haven’t been bars in Iran for the past 40 years, bar food per se doesn’t have a place in Iranian cuisine, so tonight she will be reinterpreting a number of popular Persian dishes in a format meant to be shared over drinks.

While rice, a staple of most Persian meals, would typically accompany some of these dishes, tonight we’re forgoing it in favour of a selection of traditional breads. Iranian cuisine relies heavily on herbs, nuts and fruits — sweet and sour are common flavour profiles in Iran — but the focus will be on more savoury dishes. This menu seeks to embrace the Iranian culinary tradition while exploring some new ideas that will make their way into a new venue Pouria will be opening in the near future.

Dishes will be served banquet/tapas-style for sharing

Baghali Ghatogh
Shredded duck confit with poached egg on a bed of white beans cooked with tumeric, garlic and dill.

Fesenjan
A savoury stew of walnuts and pomegranate molasses served with pork meatballs. The most well known dish from the Caspian provinces of the north.

The dishes will be accompanied by a selection of various types of Iranian breads and pickles.

—–
Pouria Lotfi has been an on-again, off-again resident of Toronto. Since opening Cafe Pamenar in late 2010 Toronto has become more home than anywhere else. Last year around this time he had plans to put Pamenar in a caretaker’s hands and move away for a while but as is often the case, life had a different plan. A new opportunity came up and he doubled down on staying in the city. Currently he has just begun work on a new project in the soon to be build neighbouring building. Pamenar will soon have a twin bar equipped with a kitchen. The food will be inspired by the cuisines of Iran, Central Asia and the Caucasus.

—–
Every weekend The Depanneur invites a guest chef to host a fun, family-style dinner party.
Learn more about the Rusholme Park Supper Club