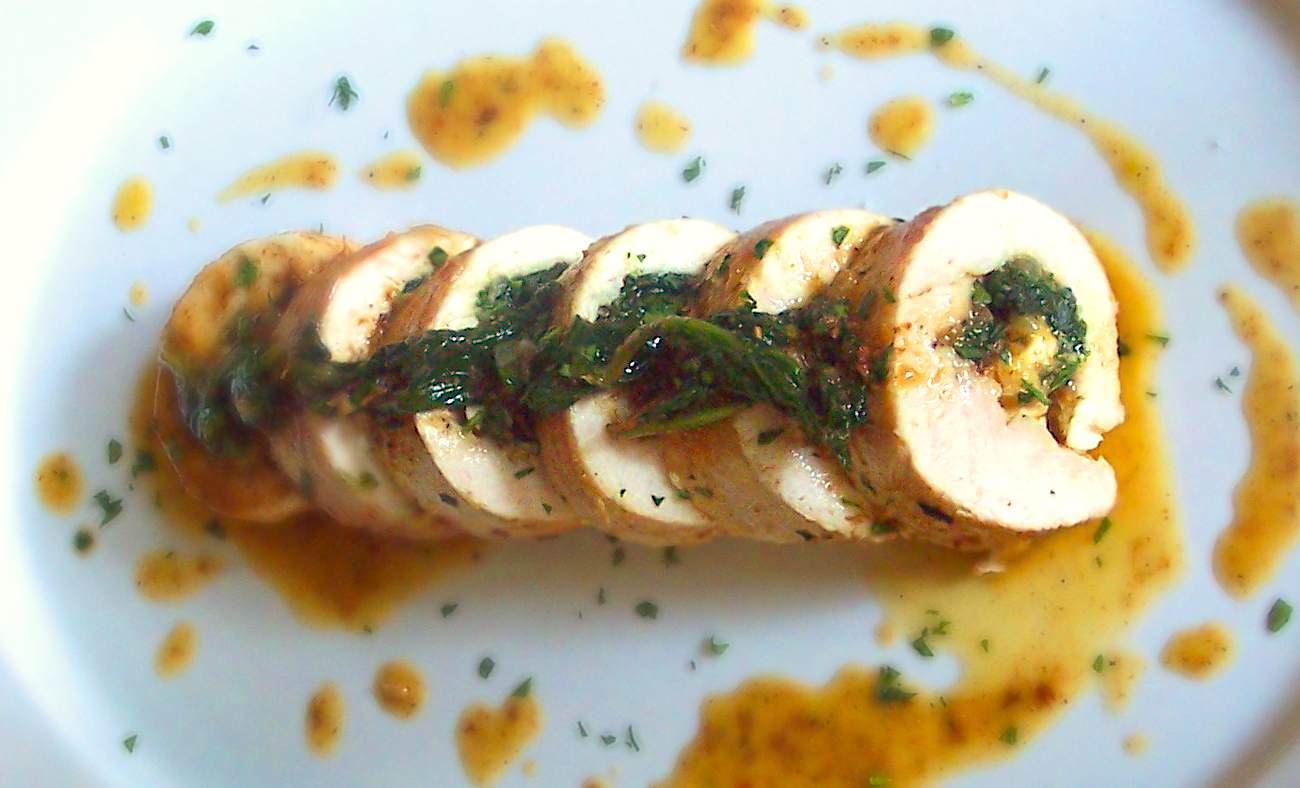 Portuguese gastronomy includes influences of Asian, European, African, South American and Indian cuisine with a bountiful supply of unique ingredients. All these influences inspired Chefs Annalisa Lattavo and Ryan da Silva of Black Ovis to explore Ryan’s background and co-create an elegant dinner exploring traditional Portuguese dishes in a new light. Using techniques honed in some of Toronto’s top fine dining establishments, the two of them are reinterpreting favourite dishes from Ryan’s childhood in Little Portugal with a sophisticated, modern twist.
—–

Caldo Verde
A traditional Portuguese soup served at virtually every family gathering; very much a classic peasant’s dish consisting of greens from the garden and potatoes poured over smoked chouriço sausage. These homemade chouriço are flavoured with a pimenta made from chillies picked and fermented in Caledon in Autumn 2018, and smoked for several hours over apricot wood from Annalisa’s grandfather’s property. It is accompanied with marinated kale, and smoked paprika oil.

Churrasqueira Roulade
Drawing inspiration from Toronto’s many churrasqueiras (Portuguese rotisserie chicken restaurants, but translates to “barbeque grill”), this dish holds onto the classic flavours but elevates the experience with sophisticated culinary techniques. The chicken breast is deboned, brined, precisely slow cooked via sous vide, then flash-seared for colour; the dark meat is flattened and tenderized, rolled around the breasts and fresh herbs into a classic French roulade, and then gently poached. Any remaining bones are cooked down to a produce silky jus.

This will be the centerpiece of a family-style banquet of Portuguese-inspired side dishes such as Parisienne potatoes cooked in paprika oil, tender pea shoots sautéed in sofrito, butter-glazed peas and variegated carrots, and a simple green salad. The meal is accompanied by fresh Portuguese corn bread, preserved peppers in oil and vinegar with celery hearts and garlic, and a homemade Anaheim chilli piri piri hot sauce.

Arroz Doce
Rice pudding is a very traditional dessert in many cultures, but this one is prepared in the Portuguese style that Ryan remembers from his childhood, but with a little contemporary spin. Served warm, the arroz doce is topped with homemade dark chocolate ice cream, almond tuille, dried cherry port sauce, and a dusting of cinnamon.
—–

—–
Annalisa Lattavo and Ryan da Silva are Red Seal certified Chefs whose paths in the culinary industry crossed in March 2016 while working for the McEwan Group. Since then they have done private dining at The Depanneur, Merchant of Green Coffee, and The Exchange in Bolton, as well as at Campbell’s Cross Farm in Caledon where they put on farm-to-table dinners in the farm’s sunflower fields. In the last year, Ryan and Annalisa have been travelling to gain inspiration with stops including Aldea in New York City, a one-Michelin star Portuguese restaurant run by George Mendes, co-author of My Portugal, and a big inspiration for the young chef duo. When they are not busy farming, cooking, hosting private dining events, or working in some of Toronto’s finest restaurants, Annalisa and Ryan are posting their projects and future events at @Black.Ovis

—–
Every weekend The Depanneur invites a guest chef to host a fun, informal dinner party.
Learn more about Supper Clubs at The Depanneur