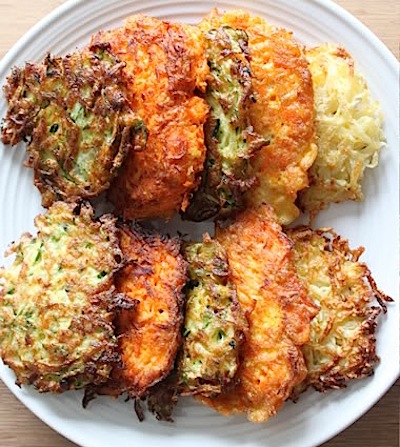 Hanukkah, a once-obscure holiday that often falls around mid-December, somehow got caught up in all the Christmas hype and ended up becoming one of the best known Jewish festivities. A commemoration of a miraculous oil lamp that stayed lit for 8 days while a Jewish temple was under siege, it is traditionally celebrated with the lighting of candles and the eating of fried foods like potato pancakes (latkes) and jam-filled doughnuts (sufganyot).

Start: “What am I, Chopped Liver?”
Rich pâté of caramelized onions, organic sunflower seeds, and truffle oil, with house-made crackers.

Star: Potato Latkes 3 Ways
Crispy potato pancakes with onion and apple, with zucchini and zaatar, and with golden beets and delicata squash.