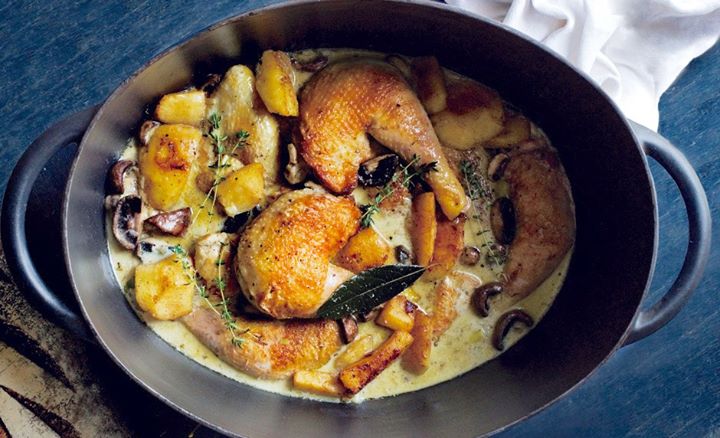 France is home to the concept of terroir – the taste of a specific place – the combination of geography and season, history and culture, tradition and food that give each region it’s unique specialities. Chef Chantal Véchambre combines her study of the history of French cuisine with decades of experience in the kitchen to offer this second installment in a series exploring regional French cuisine.

Tonight’s dinner is based in Normandie, a region in Northern France facing the English Channel, whose long-standing fishery provides varied seafood to the local cuisine. It is also renowned for its amazing butter, cream and cheeses — like Camembert, Pont l’Évêque, Brillat-Savarin, Neufchâtel, and Boursin — which feature prominently in the region’s cooking. It’s cool climate is also well suited for apple orchards, making cider and apple brandies like Calavados more common than wine or beer.

—–
Rillette de Canard
A small amuse bouche that combines the rich flavour of duck (a specialty of Rouen) with butter and dried apple, two other Norman delicacies.

Marmite Dieppoise
Dieppe is a seaside town, whose destiny became entwined with Canada’s in 1942. Home to many fishermen, the local fish soup — once cooked on board the ships in a cast-iron pot (a marmite) — and made with mixed seafood, carrots, leeks, white wine and cream, eventually became a sophisticated dish enjoyed throughout France.

Camembert Pannequet
Crêpes are popular across Northern France, which when stuffed, folded into a square and baked, are known as pannequet. This one is filled with Camembert, one of the most famous cheeses of Normandie, and served with spring greens.

Poulet Vallée d’Auge
The Auge Valley is lush green region in Normandie, and this luxurious dish celebrates the bounty of the landscape. Tender chicken breasts are sauced with a combination of apple, cider, mushrooms and fresh cream. Served with seasonal vegetables, and new potatoes roasted in butter and dusted with Fleur du Sel, another specialty of the sea coast.

Teurgoule
As the Norman corsairs got rich stealing rice and the cinnamon from Spanish fleets, this unique kind of rich, baked rice pudding became a traditional dessert. The name, from the old pronunciation of “Tord la gueule” (“twist mouth”), stems from when the dish was made very dense and over-spiced. Today, it is made as a very creamy, smooth and deliciously milky dish, baked for several hours in the oven until covered in a heavily caramelized crust. It is so revered that it even has its own guild —the Confrérie des Gastronomes de Teurgoule et de Fallue de Normandie — which presides over an annual Teurgoule competition.
—–

—–
Chantal Véchambre, originally from Paris, is a chef certified in both French cuisine and pastry-chocolate. In 2005 she moved to New Brunswick where she began her own business as caterer. Her independent research in culinary history led her to the Fortress of Louisbourg (Nova Scotia), a National Historic Site of Canada, where she developed new recipes for the site’s restaurant, and culinary workshops to the public, inspired by the 18th century recipes. She wrote the award-winning book French Taste in Atlantic Canada, 1604-1758, A gastronomic history (CBU Press), featuring ingredients and recipes of the colonial period. Now established in Toronto, she pursues food writing and cooking ventures about French cuisine: supper clubs, events, private and corporate catering, as well as ongoing research into Canadian and French culinary history.
http://www.chantalvechambre.com/