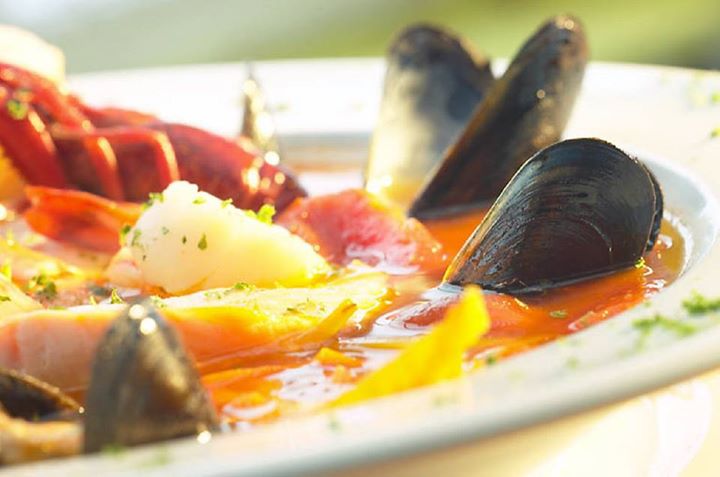 The unique culinary traditions of Basque Country along the border of Spain & France have long been cultivated in private gastronomical societies known as Txokos, where male members gather to cook, eat, drink, trade recipes and celebrate Basque culture. The rise in popularity of pintxos (pinchos), or Basque-style tapas, has helped make Basque cuisine a global phenomenon.

Tonight’s menu, a collaboration between chef Dali Chehemi and French-Basque patissier Christophe Folgoas, showcases some of the best known Basque dishes and ingredients.

—–
Piperrada
A rustic dish prepared with onions, peppers and tomatoes sauteed and flavoured with “ezpeletako biperra”, the Espelette pepper characteristic of the Pyrénées-Atlantiques region. It has long been a considered a quintessential Basque dish as its manifests the colours of the Basque flag (red, green & white). Served with Toulouse sausage and poached eggs.

Ttoro
This Bouillabaisse-like seafood soup incorporates several different kinds of fish, seafood and mussels in a Basque interpretation of an dish found in one form or another from Portugal to Italy, given a regional twist by the distinctive use of Piment d’Espelette. Finished with fresh herbs, and served with crusty baguette, it is the Soul Food of the Mediterranean.

Gateau Basque
Christophe Folgoas is chef patissier at Rahier, one of Toronto’s most acclaimed high-end pâtisseries. For tonight’s dinner he taps his French-Basque heritage to create the eponymous Basque dessert. This simple yet refined cake features a crunchy, almond-flour pastry crust with a rich crème pâtissière cream filling.

Tickets sales are now closed. Contact us if you wish to be put on the waiting list.