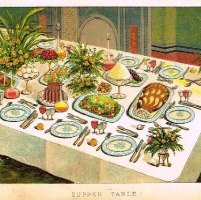 We’re gonna party like it’s 1899! Vegan chef and food history geek Emily Zimmerman is back with her unique take on Victoria Day: a 5-course Victorian-inspired dinner party, re-imagined as a creative and delightful vegan feast.

The Victorian English dinner party was a riot of conspicuous consumption; extant menus show a parade of complicated, expensive meat dishes, elaborate desserts, and finicky sides. It was a way to show off a family’s income, their cook’s skills, and their savvy about fashionable dishes.

Even today, when most people think of a dinner party they think of dressing up, following the rules, and letting their hosts show off. Of course, at the Dep, (and in many of our homes) a dinner party is more about sharing time with friends, building a community of like-minded folks, and enjoying a great meal.

So here’s a bit of both: a vegan version of a meal that a late-Victorian household might have with their nearest and dearest. Not a parade of finicky delicacies, but a series of delightful dishes inspired by 19th century recipes, including some rarely prepared today.

Julienne Soup
Vegetable soup, with carrots, leeks, and fresh sorrel.
In a culture that often felt that vegetables were indigestible unless they’d had the living daylights boiled out of them, here’s something fresh. Julienne soup is a delicate dish that makes the most of the last of winter’s root vegetables, and incorporates the first greens of spring in a light consommé.

Seitan roast, made with garlic, cumin, fenugreek and parsley.
No 19th century dinner was complete without a central meat dish; in fact, an impressive formal dinner might consist of little else. Ours evokes the oven-caramelized warmth of a traditional roast, but is skillfully made from okara and seitan, seasoned with cumin, garlic, fenugreek and parsley, stuffed with leeks and onion. Served with Laverbread, a traditional English seaweed dish, a sauce of laver (nori) and citrus is meant to be served with roast lamb.