SUPPER CLUB: When in Rome — An Ancient Dinner Party by Chef Luke Hayes-Alexander 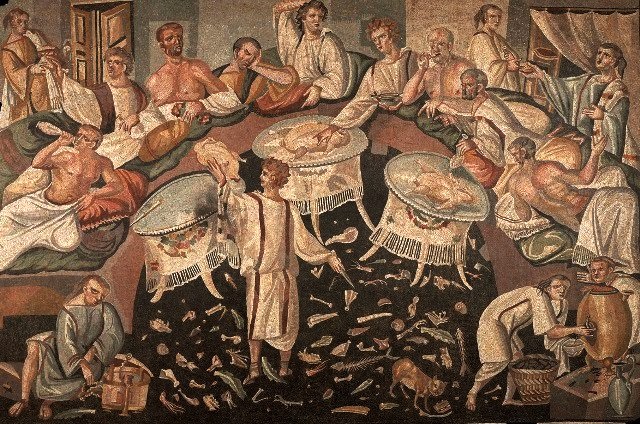 This event is SOLD OUT – congrats Luke!
Feel free to contact us to have your name put on a waiting list in the event of a last-minute cancellation.

Chef Luke Hayes-Alexander draws a page from the 1st century Roman gourmand and bon vivant Marcus Gavius Apicius, with a stylish menu inspired by the recipes compiled in the De Re Coquinaria (“On the Subject of Cooking”), a cookbook which became more popularly known as the Apicius manuscript in his honor.

Warm Squash Salad with Herbs, Grated Cheese, Long Pepper, Pine Nuts, and Honey
Squash and carrots were some of the most common vegetables in Rome at that time. The preferred way to prepare them was to cook in a mixture of wine, honey, and black pepper, so that it’s slightly sweet/spicy, and garnished with a sheep’s milk Pecorino Romano.

‘Lucanian’ Sausage with Must Bread, Moretum Sauce, and Assorted Garnishes
A very flavorful, lightly smoked sausage seasoned with rosemary, lovage, black pepper, garlic, rue, anchovy, cumin, thyme, and a few other things. Must bread, or Mustacei, is a bread baked with grape must (freshly pressed juice with skin) that gives it a unique depth of flavour, along with cumin, anise, and bay. Moretum is a sauce utilizing a softer pecorino as its base, it’s also flavoured with celery, cilantro, rue, white wine, and olive oil, giving it a light richness that compliments the sausage wonderfully. Garnishes include liquamen, the quintessential Roman condiment; lentils cooked with coriander, garum, vinegar & honey; rustica, a green herb based ‘salsa’, consisting of mint, rue, coriander, parsley, leek, arugula, thyme, and a few other things to add freshness and colour to the plate.

Almond Cake with Spices
Almonds and nuts were very popular in Ancient Rome, with rich nut-based tarts being baked often, though mainly for the upper classes. This almond tart is based on what was called Makshufa, which was a hard candy consisting of sugar, almond, honey, sesame, saffron, and rose water. I’ll be making the cake with those flavours, and garnishing with honeyed dates, which were very common as well, often stuffed with nuts, pine nuts, or pepper, then gently simmered in honey.

—–
Chef Luke Hayes-Alexander began cooking at age 11 and by 15, after some intense training, Luke became the Executive Chef at “Luke’s” in Kingston, Ontario. After 8 successful years and accolades from The Food Network, Toronto Life, The Toronto Star and Food and Wine Magazine, Luke decided to bring his talents to Toronto, opening an underground supper club LUST, but also hosting cooking classes, private events, pop ups and catered affairs.
http://www.lukechef.com

Every weekend The Depanneur invites a guest chef to host a fun, informal dinner party.