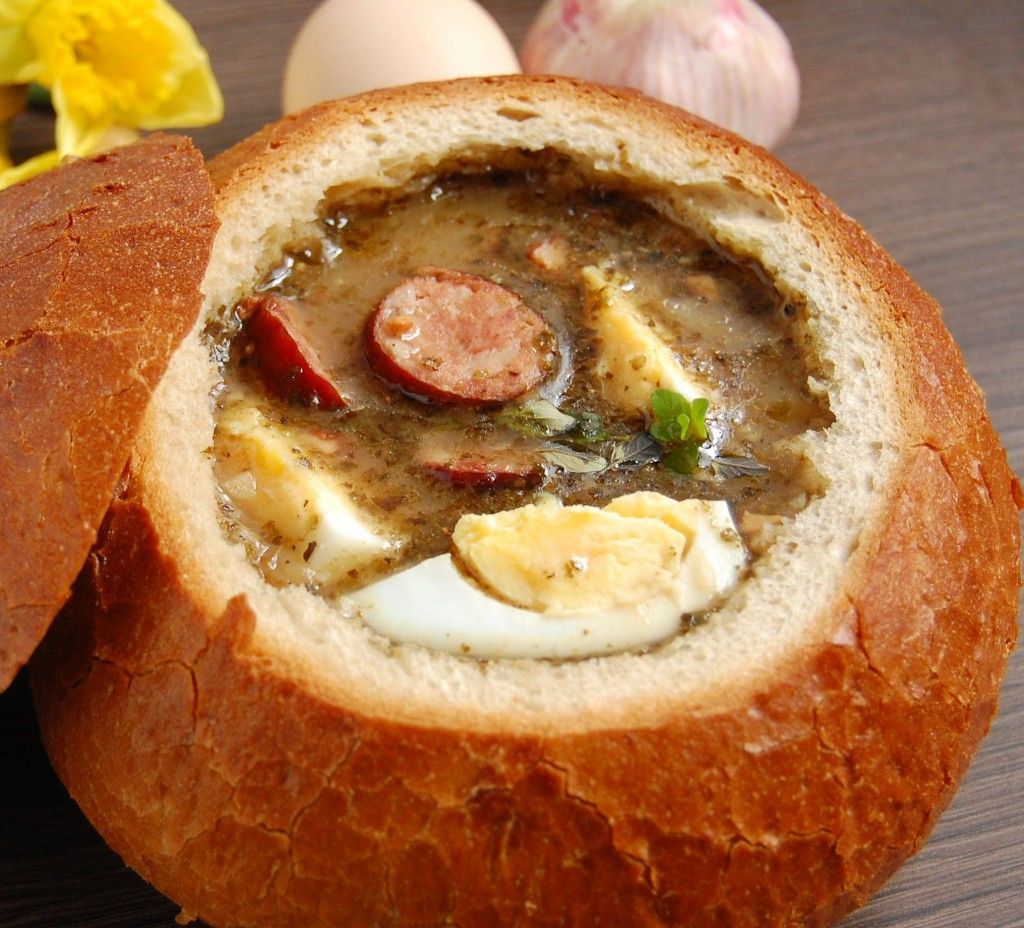 In Eastern European culture, food & music are deeply intertwined, with folksongs filling kitchens as much as the welcoming smells of simmering soups and stews. Maria Rozynska grew up in a Polish & Ukrainian household, and tonight she will be sharing several favourite traditional dishes from her childhood, spanning several generations of family recipes. Also a talented singer, Maria has joined forces with Ewelina Ferenc from Polky Village Band, and award-winning ethnomusicologist, singer and folklorist Marichka Marczyk to round out this evening with a live performance of traditional and contemporary songs from Poland & Ukraine.

—–
Forshmak
A creamy fish paste made of salted herring, eggs, apples and onions, served over thinly sliced dark rye, most often triangular shaped. In Odessa, which is considered the ‘capital’ of this dish in Ukraine, herring is sometimes replaced with sprats.

Żurek in a Bread Bowl
Also known as ‘white barszcz’, żurek —pronounced “zhu-reak” — is the most humble of all Polish soups, and at the same time the most exotic. Sour, salty and creamy, it’s served with small bits of smoked kielbasa, potatoes and hard-boiled egg in a freshly baked bread roll.

Bigos (Hunters Stew)
Popularized by the Polish nobility in the 14th C., it is said that hunters would add whatever meat they brought back with them in the stew, making it different every time. Maria’s recipe is enriched with smoky bacon, Polish kielbasa sausage and shredded pork shoulder plus plenty of tender cabbage & sauerkraut, slow-cooked onions, carrots as well as infused with red wine and prunes for a hint of sweetness.

Lviv Syrnik (Cheesecake)
Made with rich cottage cheese, quality eggs, a generous amount of butter, flavored with fresh lemon zest and glazed with chocolate, Lviv Syrnik is the most popular dessert in Western Ukraine. Its light, fluffy,  and delicate texture melts in your mouth, a traditional Eastern European dish that long predates trendy and immensely popular Japanese souffle cheesecakes.

Originally from Warsaw, Maria Rozynska grew up in a Polish/Ukrainian household observing her mother, grandmother and great grandmother create consistently yummy cuisine picking up generations of knowledge and recipes. They were the recipes worth talking about and ones Maria wanted to spread. Through her cultural cooking school Just Be Cooking, Maria now teaches people how to make traditional food, while inviting other cultures to do the same in order to break down cultural barriers by uniting us through food and song.

Ewelina Ferenc is a founding member of Polky Village Band, a professional Polish folk band based in Toronto, and Blisk, an all female Balkan band. Ewelina’s repertoire consists of songs learned growing up in Poland, as well as a shared passion for the enigmatic and upbeat style of Eastern European music.

Marichka Marczyk is an ethnomusicologist, singer and folklorist who graduated from the National Academy of Music in Kyiv in 2002. She is one of the founding members and soloists of Bozhychi, a legendary folk choir that has toured the world presenting traditional Central and Eastern Ukrainian vocal music for over 15 years. Marichka has over 1000 songs in her repertoire, which she collected over countless ethnographic research expeditions, and which she performs regularly in different iterations with a number of groups both traditional and contemporary. Her solo projects, Sonce Klosh, Kyky Shanel and Lemonchiki Projekt have performed all over Ukraine, Russia, and Europe at folk, jazz, and world music festivals and she often works with renowned Ukrainian and Canadian musicians such as Oleg Skrypka, Vasyl Popadiuk, and Lemon Bucket Orkestra, and was one of the creators of an award-winning immersive musical about the 2014 Kiev Uprising, Counting Sheep.

—–
Every weekend The Depanneur invites a guest chef to host a fun, informal dinner party.
Learn more about Supper Clubs at The Depanneur