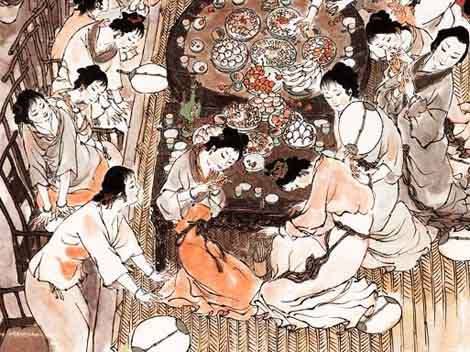 The end of summer, the harvest and the autumn equinox have been celebrated around the world for millennia. In China, agricultural production was closely tied to the lunar calendar, so the Moon figured prominently in many folk traditions and mythology. This became a central theme in Autumn festivals, including offerings made to Chang’e, known as the Moon Goddess of Immortality.

Like Thanksgiving in the West, the Chinese Mid-Autumn, or Moon Festival focuses on family gatherings, gratitude for the harvest, and the promise of an abundant future. Not surprisingly, a rich and varied culinary tradition has developed around the feasts and family meals celebrated at this time of year. These feature seasonal ingredients like peanuts, green soybeans, duck, taro and garlic, as well as round, symbolic foods like pomelos and Moon Cakes that represent abundance, completeness and unity.

For this family banquet, Lejen Chen combines her interest in traditional rural Chinese foodways and local, organic ingredients for a very special 10-course tasting menu. This feast will cover the wide gamut of cooking methods common in China, from smoking, braising, and steaming to blanching, stir-frying and drying, and feature local, organic produce from Vicky’s Veggies’ and Marvellous Edibles.