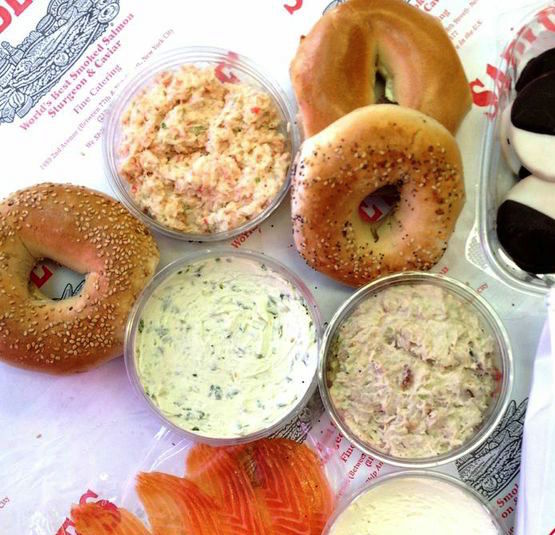 According to Jewish dietary laws, meat and milk dishes have to be prepared and served separately. As a result, North American kosher food traditions have evolved into two distinct categories: the delicatessen, which serves the meat dishes, and “appetizings” — ie. everything eaten with bagels — such as dairy, fish & salads. Using a few clever tweaks and substitutions, a traditional appetizings menu can be made into a delicious vegan feast. Come, eat!

Join The Dep’s resident vegan maven, Emily Zimmerman, and learn how to turn homemade bread dough into old-school bagels, to eat along with a rich schmear of quick cashew cream cheese. We’ll also make eggplant creamed “herring”, using nori for that salty seafood flavour, as well as an even-better-than-egg salad with tofu, veggies, and special salts and seasonings.

And as a bonus, we’ll make a celery seed and sweet cicely soda, based on the unique Brooklyn appetizing drink, Dr. Brown’s Cel-Ray soda. It may not be unavailable on this side of the border, but we’ll make a cordial that when mixed with seltzer, tastes just like the real deal.

Participants will enjoy a delish “dairy platter” of our bagels, with all the above toppings, along with a cucumber salad, and take home a portion of mock egg salad, and celery soda syrup.

——
Emily Zimmerman is the lady behind Pear and Pepper – a freelance chef cooking deluxe, delicious vegan dishes and retro comfort food like whoah. She can be found at The Depanneur every Wednesday evening, and hosting the occasional Rusholme Park Supper Club or vegan Workshop.