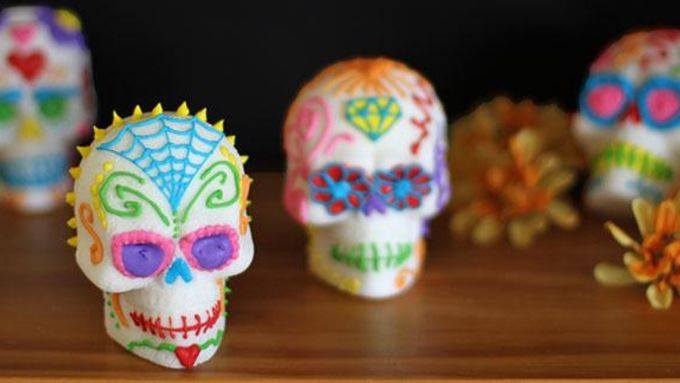 According to ancient traditions in Mexico, between November 1st and 2nd — Dia de Muertos — the barrier between the living and the dead worlds become blurry, and the souls of the dead have the chance to come back, and be celebrated by their families and friends. Ritual foods are prepared and offered to the souls of the dead in colorful altars, providing an opportunity for families to bond around the shared memories of those that are no longer with us.

Traditionally the offerings at the altar woud include dishes like chicken mole, pozole, tamales, and pumpkin empanadas, as well as sugar skulls, and marigolds. Join Paola and Adriana of Santo Pecado Mexican Catering this October 31 for a fun, immersive introduction to the Dia de Muertos tradition as you learn how to make your own sugar skulls and chicken mole tamales. They will show how an altar is set up, and discuss the traditions in detail.
—–

—–
Born and raised in Mexico, Chef Paola Solorzano comes from a large family of abuelas (grandmothers), sisters, aunties and cousins that take great pleasure in gathering at the kitchen to share recipes, stories and secrets that invariably end in flavourful feasts.