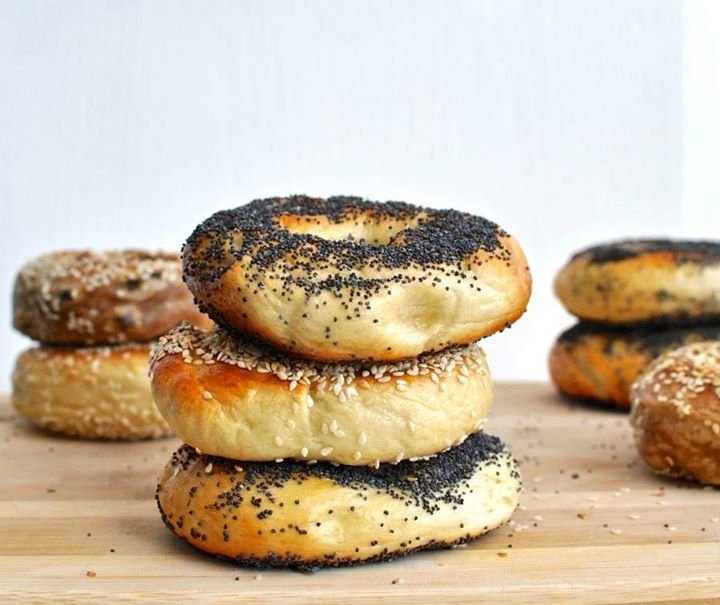 Though the origins of bagels are somewhat obscure, it is known that they were widely consumed in Ashkenazi Jewish communities as early as the 17th century. A small yeasted bread traditionally shaped into a ring, bagels are notable for being boiled for a short time before being baked. The result is a dense, chewy, doughy interior with a browned and sometimes crisp exterior. Bagels are often topped with seeds baked on the outer crust, with the traditional ones being poppy or sesame seeds.

Bagels are now popular around the world, and wood-fired Montreal bagels are one of Canada’s few true culinary treasures. However, now that most people’s bagels experiences come out of a supermarket plastic bag, the delights of chewy, homemade bagels are only rarely, if ever, experienced.

But with a little help from Chef Jordan Hrycyshyn, you will be able to bake up a fabulous batch of homemade bagels anytime the craving strikes! This fun, hands-on workshop begins with review of all the ingredients, and then leads you through all the steps from making the “sponge” through to the final dough, to the shaping, boiling, seeding and baking. Everyone will get to participate in every step of the process and be able to flavour their bagels with a wide range of herbs, and seeds. Each participant will get to make 6 bagels to take home or enjoy with a variety of local cream cheeses and spreads.

—–
Jordan Hrycyshyn is from Barrie, Canada and began his culinary career as a dishwasher/prep cook at a bakery when he was just 15 years old. Since then he has worked at Fairmont Hotels and Resorts properties in New Brunswick, Quebec and British Columbia.

After cooking across Canada, Jordan toured the world, falling in love with Mediterranean and East Asian cuisine in places including South Korea, Thailand and Spain. He has worked as a private chef since 2014 while learning under the astute tutelage of some of the world’s top industry chefs. Jordan has taken culinary courses across Asia and North America, and strongly believes in taking time to focus on continuing to improve his craft and grow his cookbook collection. Residing in Toronto has allowed Jordan to expand his food repertoire as a freelance chef, with a focus on specialized in-home meal preparation.  JH Culinary
—–

OFFSITE WORKSHOP: Croissants from Scratch by Leo Baduria (AM)