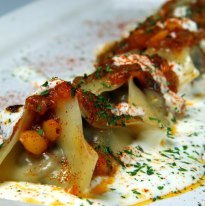 Have you ever heard of Afghan dumplings? The dumpling finds itself in kitchens all over the world – so many cultures have their own version – the Chinese have their shumai, the Poles have their pierogies and the Japanese have gyoza.

Afghans make aushak – a leek paste-based dumpling which is slathered with garlicky, thick yoghurt and a layer of spiced tomato meat sauce. Traditionally aushak is served with a meat sauce, but we will prepare a version for vegetarians, too.

Come join Shayma, a Pakistani-Afghan award-winning food writer and photographer as she teaches you how to make this Afghan dish. It is wonderful served at a dinner party and eaten family-style.

Her intensive workshop will teach you how to:
• Create the filling from scratch
• Create the toppings from scratch
• Stuff, assemble and fold the dumplings
• Steam the dumplings
• Create a tempering* to drizzle over the toppings
• Assemble the dish
* (a method in which in which ground spices and herbs are heated in hot oil and added to a dish. The oil extracts the aroma of the spices and herbs)

This event is SOLD OUT
Please contact us to be put on a waiting list in the event of a last minute cancellation.

Shayma Saadat is a Pakistani-Afghan (of Iranian ancestry), food writer and photographer. You can read more about her on her website, The Spice Spoon, which has been recognised by The Independent newspaper in the UK as one of ‘Top 50 Food Websites in the World.’ She has previously been a guest chef at the Depanneur for a Persian New Year feast. You can find her features in BBC’s Good Food Magazine and Edible Toronto. When Shayma’s not busy delving in the world of food, she works at the Ministry of Energy as a Senior Policy Advisor. Follow her on Twitter, Instagram and Pinterest @SpiceSpoon